– Erhabor said since joining the police in 1992, he has not shot anyone, adding that he always prayed against any incident that will require using the gun

– Some Nigerians have also raised about N500,000 to compensate ASP Erhabor for his professional conduct

Sunday Erhabor, an assistant superintendent of police, who was harassed by a young motorist in Lagos, says he has never shot any person since he joined the Nigeria Police Force (NPF) in 1992.

The policeman who has been honoured by the governor of Lagos state, Babajide Sanwo-Olu, made this known in an interview published by The Punch on Tuesday, April 20.

It is not enough reading books: University of Ibadan first class graduate who finished with 6.6/7.0 speaks

A video of how a man who was stopped for driving against traffic by officers of the Rapid Response Squad (RRS) assaulted two armed policemen had recently surfaced on social media.

The driver, identified as one Victor Ebhomenyen, was seen pushing Erhabor, who was armed with an AK-47 rifle, by his chest while attempting to shove him to the ground.

Despite the provocation, Erhabor maintained a professional calmness, thereby averting what could have led to another incident of extra-judicial killing.

In the interview, Erhabor said he has faced confrontations from citizens including being slapped by a woman, but he has never thought of using his rifle at such moments.

Regarding the incident that brought him to the limelight, Erhabor said he instructed his boys to record the young man while he was assaulting him and told them not to touch him “because something was wrong with him and he shouldn’t allow him die in our hands.” 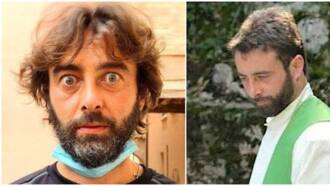 “God forbid, I have never shot anyone before. Yes, I have never. Whatever you do to somebody, somebody must do to you. In fact, I hate those sessions that require shooting.

“Shooting people is not a good omen. Every day, before any operation, I do pray to God that He won’t allow me to encounter a situation that would warrant me to shoot.”

The motorist has since been arrested.

Meanwhile, some Nigerians have raised about N500,000 to compensate Erhator for his professional conduct and restraint when assaulted by the traffic offender.

It was gathered that the donation was started on Sunday by a Facebook user, Ugo Egbujo.