When Sunday Erhabor, a police officer of the Lagos command and Assistant Superintendent of Police (ASP) was attacked, harassed and bullied by an erring driver taking “one way”, never did he know that the terrifying moment with would shoot him into the limelight — and of course, fetch him praise and award.

The 53-year-old celebrated policeman was on duty with his subordinates at Four Point by Sheraton Hotel, Oniru on Saturday, April 17, when a man identified as Victor Ebhomenyen, 33, drove against the traffic.

Efforts by ASP Erhabor to arrest the traffic offender led to a scene of a chaos as the ageing officer was humiliated and even threatened with job loss by Ebhomenyen and his cohort.

Armed with his official AK-47 rifle, Erhabor did not retaliate or pull the trigger. He, instead, demonstrated civility and patience, maintaining professional conduct in the face of intimidation. 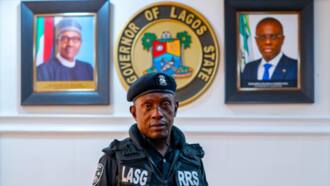 His professionalism, which came on the heels of the protest against continued police brutality, hit the internet. Since then, the police officer has become a celebrated role model for the men of the Nigeria Police Force (NPF).

On Monday, April 19, he was awarded by the governor of Lagos state, Babjide Sanwo-Olu. This came hours after Nigerians raised over N500,000 for the officer who has less than five years to use in service.

Speaking with The Punch in an interview on Tuesday, April 20, ASP Sunday Erhabor who has worked “mostly in general duties” said he restrained from pulling the trigger because “it was not a criminal issue, it was a civil issue.”

“I can’t resort to the use of my gun just because somebody slapped me. If I did, in the end, my punishment would be worse than that of the person that slapped or harassed me,” he said. 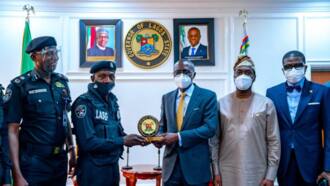 On Alcohol and marriage life

ASP Erhabor, who lost his wife Mary to cancer in 2009, said he is never a friend of alcohol and smoking. In fact, he said he always warns his colleagues on the danger of smoking and drinks on their personal and professional life.

I never shot anybody since i joined police force in 1992

Forced into the police by lack of job and other struggles, Erhabor said since he became an officer of the country’s foremost law-enforcement agency, he’s not shot anybody.

“God forbid, I have never shot anyone before. Yes, I have never. Whatever you do to somebody, somebody must do to you. In fact, I hate those sessions that require shooting. Shooting people is not a good omen.” the celebrated cop said.