– She said she wouldn’t mind doing it over again

A young lady has got many talking on social media as she revealed that she had surprised her man on the occasion of his birthday with a nice outing.

The lady @Tommiii____ took to Twitter to share beautiful photos of how she spoiled her 21-year-old lover at her own expense.

The 19-year-old stated that she was willing to do it for him a second time.

“Surprised my man with a baecation for his 21st birthday and i’ll do it all over again.” Undying love: Lady hops on a plane with hubby for dinner at his favourite restaurant in California

From the photos she shared, they went on a boat cruise, visited the beach and so forth.

Tweeps couldn’t get enough of the pictures as they gushed over it. Many wondered where she got the money she used for the treat.

“At the end u leave your reply button open, make fools come praise you abi.. Where u see money dey cruise life like this.”

“Lol, girl is spending her man’s money on him just like Cristiano Ronaldo babe used the money she saved from the allowances he pays her to get him that Brabus Benz.

“Sis I see what you did there. 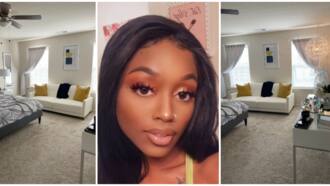 Young lady shows off her tasteful room that is like a 5 star hotel, photos cause huge stir on social media

Meanwhile, Legit.ng earlier reported that a girl had a money-stacked cake on her birthday.

In a viral video, the young lady was at a birthday party with some of her friends.

Projecting from the cake was a large ring that appeared to bear the tag ‘happy birthday’. When it was time to eat the cake, she had to take out the ring. That was when her eyes started to pop as the ring was attached to a long chain of money.