PAY ATTENTION: Over the years, we have impacted so many lives together. Each time we uncovered a story of misfortune or injustice, viewers from across the world rallied in support – we gathered funds for education, housing, and food for the heroes of our stories. Right now, we wish to focus our help on the Children of Calabar. Help us change more lives – support us on Patreon.

Fans show love to their favourite celebrities in various ways. Meanwhile, for these celebrities, it could be one of the craziest things that someone has done for them.

Singer Omah Lay recently shared one of the craziest experiences that he has had with a female fan. 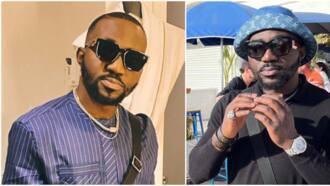 In an interview with HipTV, the Godly crooner revealed that the fan trailed him down to his former apartment at 3am in the morning, got through his gate, knocked on his door just to take a photo with him. Speaking on his career, Omah Lay stated that he feels blessed and grateful as things happened faster for him than he expected.

In other news, Legit.ng earlier reported that Omah Lay granted a female fan’s wish to grace her birthday.

A tweep tweeted out a video of a lady telling the musician that she would be happy if the musician would come to her birthday. Tania Omotayo reacts after male follower referred to her as housewife

Hours after the video, the musician quoted it, wished the lady a happy birthday in advance as he said he would love the plans open.

Omah Lay asked his manager to be contacted so that the plan can be factored into his schedule.