– Reactions have continued to trail the rescue of some schoolgirls who were abducted from Government Girls Secondary School, Jangebe, Zamfara state

– Banditry has become widespread in the northeast of the country

Some of the rescued schoolgirls who were abducted from Government Girls Secondary School, Jangebe, Zamfara state, have narrated the ordeals they faced during captivity.

The Tribune reported that one of the girls, Hunainatu Abubakar, said she saw her father who was kidnapped over three months ago in the custody of the bandits. 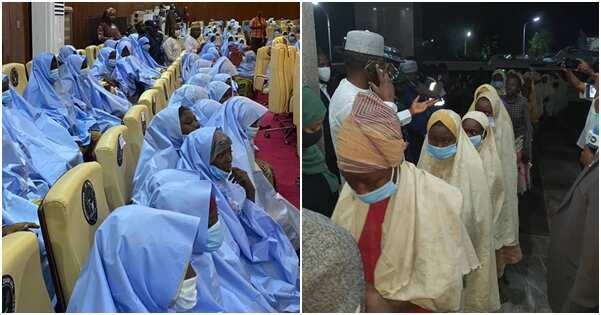 All 279 Nigerian students kidnapped from their boarding school in Zamfara state have been released.
Photo: @Bellomatawalle1, @HamisuAnas
Source: Twitter

She however stated that her father told her not to allow the bandits to know that they were family members to avoid being killed.

Another student, Hafsat Anka, said the bandits threatened to kill, fry, and eat them if they misbehaved, according to a report by PM News. 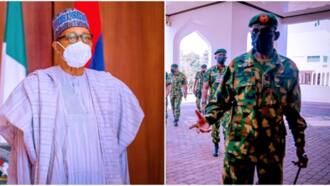 Hafsat stated that they trekked over a long distance from the school and had a stopover for some hours before they reached their destination.

She said the bandits wore military uniforms and claimed they defeated the security officials by invading the school and successfully whisking the girls away.

Meanwhile, Bello Mohammed Matawalle, the governor of Zamfara, has said that some power-drunk politicians in the state who stay in Abuja are behind the incessant kidnappings in the state.

PM News reported that the governor vowed to arrest any politician who enters the state with the intention to use thugs to foment trouble.

Legit.ng gathered that he said nobody that can claim to be above the law of the land, saying that he had drawn a battle line with the enemies of peace in the state.

Still on Security matters, the Nigerian government has imposed a no-fly zone in Zamfara as part of efforts to tackle the security challenges in the state.

According to The Cable, the National Security Adviser (NSA), Babagana Monguno disclosed on Tuesday, March 2, that President Muhammadu Buhari has banned mining activities in Zamfara to stop the rising insecurity.

He said the president had ordered the ministry of defence to deploy a massive military and intelligence assets to restore normalcy in the state.