– The revelation, which is yet to be confirmed, came from Audu Ogbeh, a former minister of agriculture

The national chairman of the Arewa Consultative Forum (ACF) Audu Ogbeh, has made a very shocking revelation as to what happens after captives are rescued from the clutch of terrorists after ransoms are paid.

Ogbeh, who was a minister of agriculture under President Muhammadu Buhari said that with information available to the forum, it is now clear that terrorists divert the ransom money into the purchase of arms, Nigerian Tribune reports.

He said some of the forum’s members in Sokoto and Zamfara have observed that many consignments of illegal arms are allowed into the nation’s borders.

Ogbeh alleged that sometimes these evil persons transport their weapons through camels which are hardly suspected by anyone. 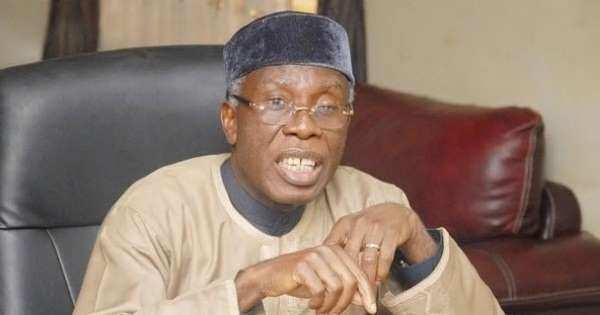 The ACF’s boss in a statement on Thursday, December 31, claimed that on a daily basis, truckloads of arms come into the country unchecked by operatives of security agencies, hence the sophisticated weapons used in carrying out more violent crimes.

“And they observed that nobody checks their baggage and nobody knows what is being brought into Nigeria.

“The question Arewa Consultative Forum would like to ask the security agencies is what are the Camels carrying and where they are heading?

Meanwhile, an Islamic cleric, Sheihk Abdullahi Isah, on Wednesday, December 16, said that most of the insecurity cases in Nigeria had a political undertone.

A statement released by the Sheihk after a media parley with journalists and seen by Legit.ng said President Muhammadu Buhari has made a tremendous effort in addressing the myriads of challenges bedevilling the nation.

Also laying curses on those conspiring to undermine the Muhammadu Buhari-led administration, the cleric said there was a grand campaign by some politicians across the country to undermine.

Insecurity: Will you be traveling for festivities? | Legit TV