– The 31-year-old retained his IBF, WBA, WBO and IBO belts following the win over Kubrat Pulev

Anthony Joshua has begun preparation for the big unified undisputed heavyweight fight with Tyson Fury in 2021.

AJ recently defeated the Bulgarian Brut Kubrat Pulev to retain his four belts back in November and the 31-year-old has returned to the gym for the blockbuster clash with Fury.

Joshua posted a photo on his Instagram page wearing a weighted vest and an additional weight chain, attempting some push-ups. 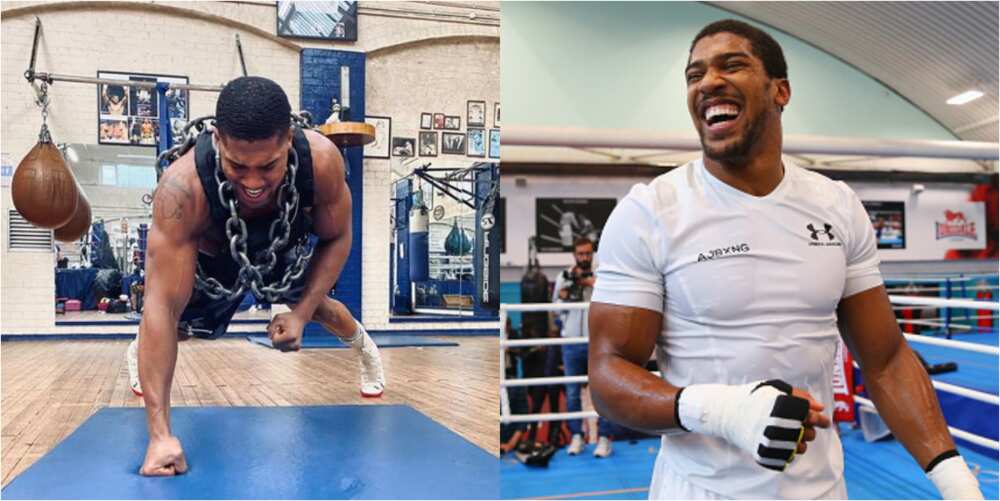 Another post made by the Nigerian born British boxer showed him staring into the camera while wearing the equipment that added more amount of load to his body frame.

Joshua made a third post which the Olympic gold medallist sparring with cruiserweight prospect Stephen Adentan.

Meanwhile, boxing legend Johnny Nelson has predicted that Joshua will defeat Tyson Fury if the highly-anticipated bout takes place in 2021.

“AJ wins by late stoppage. AJ has that raw power which will make Fury think about boxing him more than beating him up.

“As Joshua gets his second wind in the later rounds, that’s when he’ll land a shot on Fury and knock him out.”

Legit.ng had earlier reported that Anthony Joshua revealed that he thought the anti-police brutality protests tagged as ENDSARS last October was about a virus.

The SARS perceived by Joshua is a viral respiratory disease fully known as Severe Acute Respiratory Syndrome associated with coronavirus.

Joshua told Punch quoted by Pulse: “I never knew what SARS was during my time in Nigeria.

“I never encountered SARS, so, when the movement started happening, I thought SARS was maybe like a virus, I didn’t know SARS.”