Crossover service: Lagos state clears the air on N500,000 fine for defaulters, vows to do this

– The state commissioner for information and strategy, Gbenga Omotoso noted that the viral report on a N500,000 fine is misleading

The Lagos state government has made a clarification following a publication that residents who violate the 12 am to 4 am curfew on Thursday, December 31, could be fined up to N500,000.

Legit.ng gathered that a news report on Wednesday, December 30, went viral that the state government imposed a sanction of N500,000 fine against violators of the ban on crossover service in Lagos.

Gbenga Omotoso, the state commissioner for information and strategy, while clearing the air said the report was inaccurate and misleading, adding that the state government vows to enforce the curfew in place. 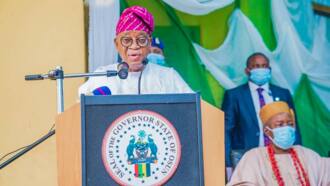 According to Omotoso, he stated that the public health safety HSS had taken care of punitive sanctions against violators with a fine between N20,000 and N500,000 at the discretion of the magistrates when asked about what would be done to defaulters of the curfew.

The commissioner’s statement was contained in a series of tweets shared on the official Twitter account of the Lagos state government.

The state government went on to urge residents and religious leaders to take responsibility by complying with all safety measures aimed at curbing the spread of COVID-19 amid the second wave of the virus.

Amid the clamour for crossover services, the Lagos government appealed to Lagosians to comply with the curfew imposed as those who violate the 12 am to 4 am curfew could be fined when caught.

Meanwhile, Legit.ng reported that ahead of the New Year day celebration, the Lagos government has set a new rule that must be obeyed by all churches in the state to prevent the spread of COVID-19. Speaking at the state house in Marina on Thursday, December 24, after his recovery from the pandemic, Governor Babajide Sanwo-Olu said that there will be no room for the service.

The governor warned that the government will not be lenient with any church that violates the state’s standing 12am-to-4am curfew.

In a related development, all churches in Lagos state have been directed to close their cross-over night services by 11 pm on December 31, 2020.

The directive was issued by the Lagos state chapter of the Christian Association of Nigeria (CAN) in a statement on Tuesday, December 29. The statement was signed by the CAN chairman in Lagos, Bishop Steven Adegbite.