– Uche Jombo recently spent some time with her son, Matthew and shared a cute video

– The actress and little boy are seen dancing to Olakira’s hit song, Maserati

Talented Nollywood actress and filmmaker, Uche Jombo, recently left many fans entertained after she shared a video of herself dancing with her son, Matthew. 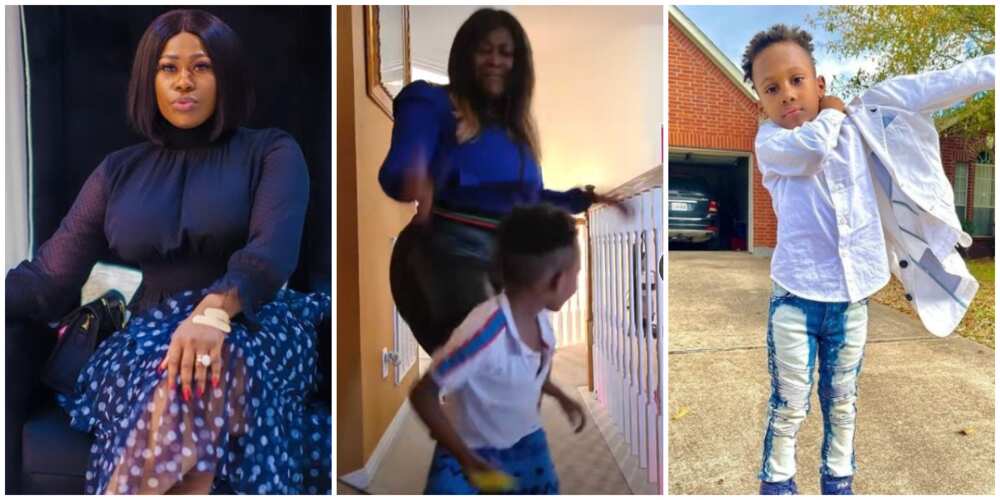 The film star, in one of her recent Instagram post, is seen dancing to Olakira’s popular single, Maserati, with her cute 5-year-old son.

Matthew who is seen with a toy in one hand attempts to copy his superstar mum’s dance steps and it is simply beautiful to watch.

The Nollywood star got married to Kennedy Rodriguez on May 16, 2012.

Shortly after, there were rumours that she got cheated on by her husband. Legit.ng reported the news of how her husband came out to publicly apologise to her.

However, Jombo came out to deny that there was anything wrong with her marriage in the first place. She also asked naysayers to stop peddling unsubstantiated rumours.

Still on the actress, It was indeed a moment of gratitude and appreciation for the popular Nigerian actress as she added a new age on Monday, December 28.

In the mood of celebration, the actress shared yet another adorable mother and son video on her official Instagram page as she announced her birthday. Uche in her caption submitted this year isn’t one that requires too much epistle in form of a birthday post.

Meanwhile, BBNaija ex-housemate, Tacha, once again left social media users buzzing with reactions after she got celebrated on her birthday by a little girl identified as Kimso.

In a recent post, Kimso shared a photo with the 2019 Pepper Dem star and accompanied it with a totally adorable birthday message which once again left people wondering if she is indeed Tacha’s daughter.