Despite calls for his inclusion into the Arsenal squad, reports from Italy say Mesut Ozil has been offered to join Juventus on a six-month loan.

The German has been left out of the Gunners’ squad for the Premier League and Europa League and there are calls from various quarters to have him return to the team.

It was gathered that Arsenal are willing to part ways with a huge portion of the player’s staggering £350,000-a-week to ensure he eventually leaves the Emirates Stadium outfit.

If the deal pulls through, Ozil will be reuniting with his former Real Madrid team-mate Cristiano Ronaldo who is now at the Italian outfit.

The Portuguese sensation was initially furious when Ozil dumped Los Blancos in 2013 to join the Gunners, but the German acknowledged Ronaldo as the best of all time.

He told Arsenal’s official website back in 2018 via SunSport:

“Another thing people always ask me about is what it was like to play with Cristiano Ronaldo and all I can say is that I’ve never seen a person like him.

“I really enjoyed playing with him because he made me better on the pitch and he’s a great guy off it, too. I gave him loads of assists and he doesn’t need me to remind him of that!

“It was easy to play with him because you didn’t need to create a lot of chances. Even if I just gave him two passes, he would score two goals and that’s why he’s one of the greatest footballers who’s ever lived.” 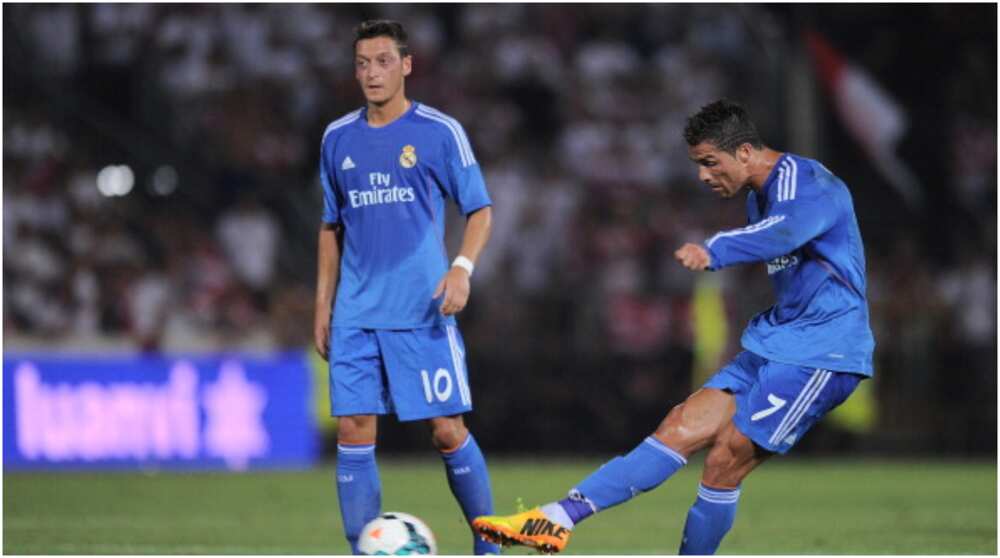 On the flip side, Legit.ng earlier reported that Barcelona youngster Riqui Puig has reportedly emerged as a top transfer target for Premier League strugglers, Arsenal.

The 21-year-old midfielder has been out of favour with Ronald Koeman since the arrival of the Dutchman in August.

He has made just four appearances across competitions so far this campaign and it doesn’t look like it will get better for the youngster soon.

The 57-year-old is looking to bring Liverpool star Georginio Wijnaldum to his squad when his deal with the Anfield outfit expires next summer.