– Bello, however, dismissed the rumour as he said the meeting had nothing to do with politics

Following the rumour about the alleged plan by the governor of Benue state, Samuel Ortom, to dump the Peoples Democratic Party (PDP), the governors elected on the platform of the All Progressives Congress (APC) from the north-central have swung into action.

Legit.ng gathered that the governors, who visited Ortom in Makurdi on Sunday, December 20, were allegedly at the state Government House to woo their counterpart back into the APC.

Speaking on the visit, the governor of Niger state and chairman of the North Central Governors’ Forum (NCGF), Abubakar Sani Bello, on Monday, December 21, debunked speculation that they were in Benue to lure Governor Ortom back into the ruling party.

Kankara: How APC is working with PDP, APGA, others to fight insecurity – Northern governor reveals 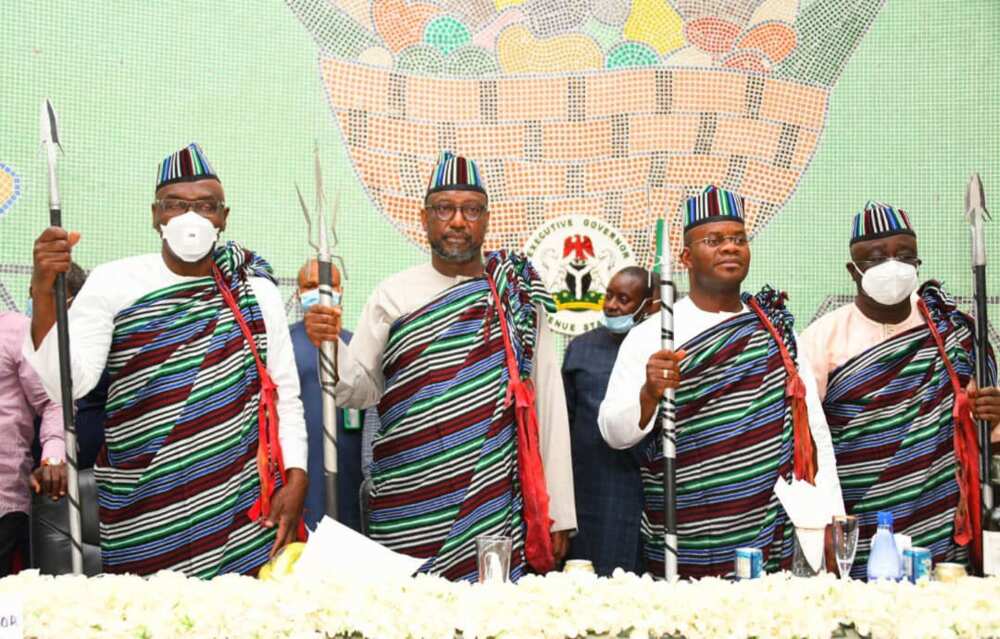 Governor Bello, who debunked the rumour while fielding questions from journalists, said their convergence in Makurdi was devoid of politics but to address the common challenges of insecurity facing their states.

He said the time had come for the states in the north-central to look inward to jointly tackle issues affecting the zone.

He explained that for the zone to achieve the desired goals, the forum has decided that the meetings be rotated amongst member states.

While expressing concern on how the zone has been short-changed in all spheres of development, Governor Bello said regular meetings would help the forum to evolve new strategies aimed at addressing the challenges confronting the zone especially as it affects security, infrastructure, economy and politics among other issues.

He described the outgoing year as the worst of all years witnessed by Nigerians and prayed to God that the nation would overcome and come out stronger.

Fear as Nigerian governor accused of stockpiling arms, intimidation, set to be dragged before UK, US, others

Meanwhile, Legit.ng had previously reported that Governor Nyesom Wike of Rivers state said that his Benue counterpart, Ortom, has no plan to return to the APC, contrary to unverified, viral claims.

It was reported that Wike made this declaration while he commissioned road projects completed by governor Ortom in Makurdi and Guma are of the state.

The Rivers governor said that true members of the PDP would remain together and weather the raging storm even in the face of numerous attempts to deny the party its rights.

APC reveals 4 reasons why this Nigerian governor should resign immediately