Lady cries out after her best friend of 11 years got married without her knowledge, recounts how they have been there for each other

– According to the lady identified as @CrystabelKelsey on Twitter, she saw pictures of her friend at the ceremony

A lady identified as @CrystabelKelsey on Twitter recently got people talking after she revealed that her best friend of 11 years got married without her knowledge.

She stated that she saw evidence of the ceremony online, cried about it, and decided to ask her friends questions. 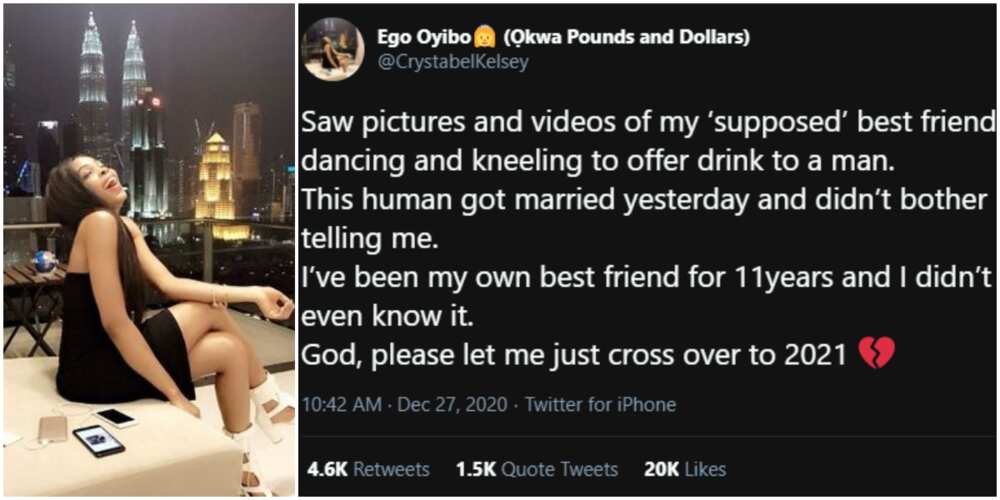 Lady cries as she did not get invited to her best friend’s wedding
Photo credit: @CrystabelKelsey
Source: Twitter

Stating the reason she got, her friend was mad at her because she did not check on her in the early stages of her pregnancy while she herself was dealing with the loss of her grandmother who doubled as her mother.

For the two weeks @CrystabelKelsey was off social media, her best friend kept her displeasure and refused to express it even when they got talking again.

She also recounted how they have been there for each other all through the years, and even though her married friend asked them to put things aside and move on, the heartbroken friend said she was scared she would be let down again

“Saw pictures and videos of my ‘supposed’ best friend dancing and kneeling to offer drink to a man. This human got married yesterday and didn’t bother telling me. I’ve been my own best friend for 11years and I didn’t even know it. God, please let me just cross over to 2021.”

Meanwhile, Legit.ng reported that the attitude of a couple towards their friends on their wedding day got people laughing on social media.

In the video, the couple was dressed beautifully as they sat by each other. Friends of the groom were spotted spraying them as music played in the background.

As the groom’s friends excitedly sprayed the couple with mint N10 notes, the heads of the husband and wife were bent without a smile on their faces.