After hungry Boko Haram insurgents attacked Borno, this is what Governor Zulum did (photos)

– As the fight against insurgency rages on, Hawul local government area in Borno state was attacked by Boko Haram

– Three persons were killed, while police station, market stalls and others were destroyed during the attack

– The state governor, Babagan Zulum, who was out of town, had to cut short his trip and rush down to visit the affected communities

Communities in Hawul local government area in southern portion of Borno, attacked by Boko Haram insurgents on Saturday, December 27, were paid a visit by the Borno state governor, Babagana Umara Zulum, the next day.

The governor had travelled to Abuja for series of scheduled activities but had to cut short his trip and flew out on Sunday morning.

No fewer than four communities, Tashan Alade, Shafa, Azare, Sabon-Kasuwa and Debro were affected in Saturday’s attack. Schools, shops and places of worship were not spared in the attack.

The insurgents looted thousands of bags of farm products recently harvested by farmers and also emptied shops and market stalls. 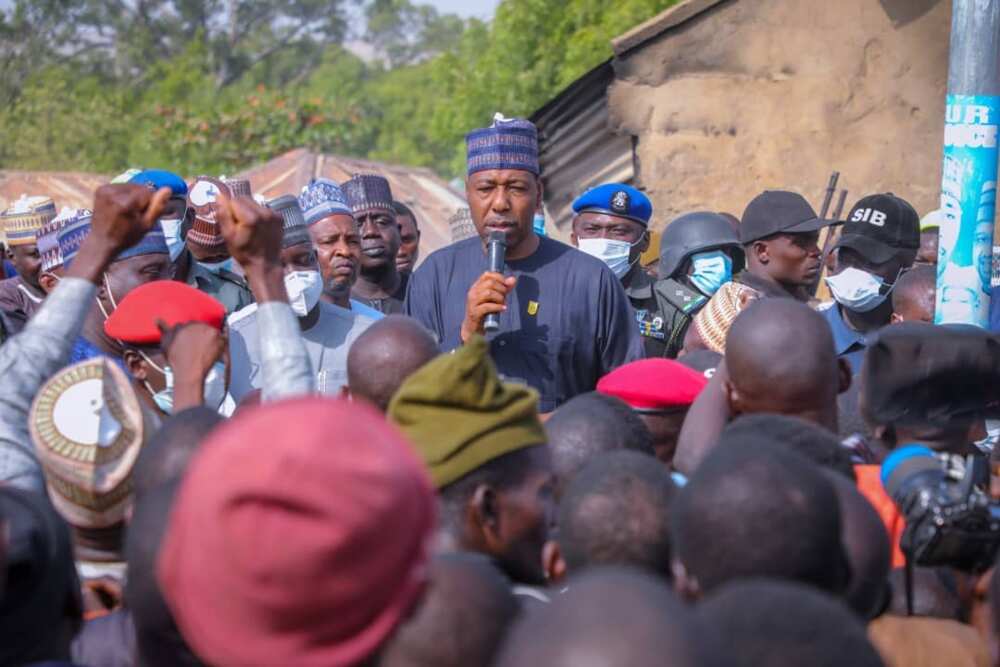 Three persons were killed in Shafa, among them two hunters and a civilian.

Governor Zulum who inspected all the properties destroyed by the sect ordered that they be reconstructed immediately.

To strengthen the local security network in Shafa community, the Borno governor gave an order for six patrol vehicles and other components to be provided.

He also ordered the provision of surveillance vehicles to hunters and vigilantes.in Yamirshika.

The governor said he visited the communities to strengthen their resilience and also provide support to local volunteers supporting the security agencies in restoring peace.

According to him, his government will remain focused on protecting lives and restoring peace in Borno state.

Magashi called on Christians as they celebrate the birth of Christ to pray for Nigeria to overcome its security challenges.

The defence minister who gave the charge in a statement on Thursday, December 24, noted that the least appreciation Nigerians can show to the soldiers who are fighting patriotically on the frontlines is to pray for them and be security conscious at this time.