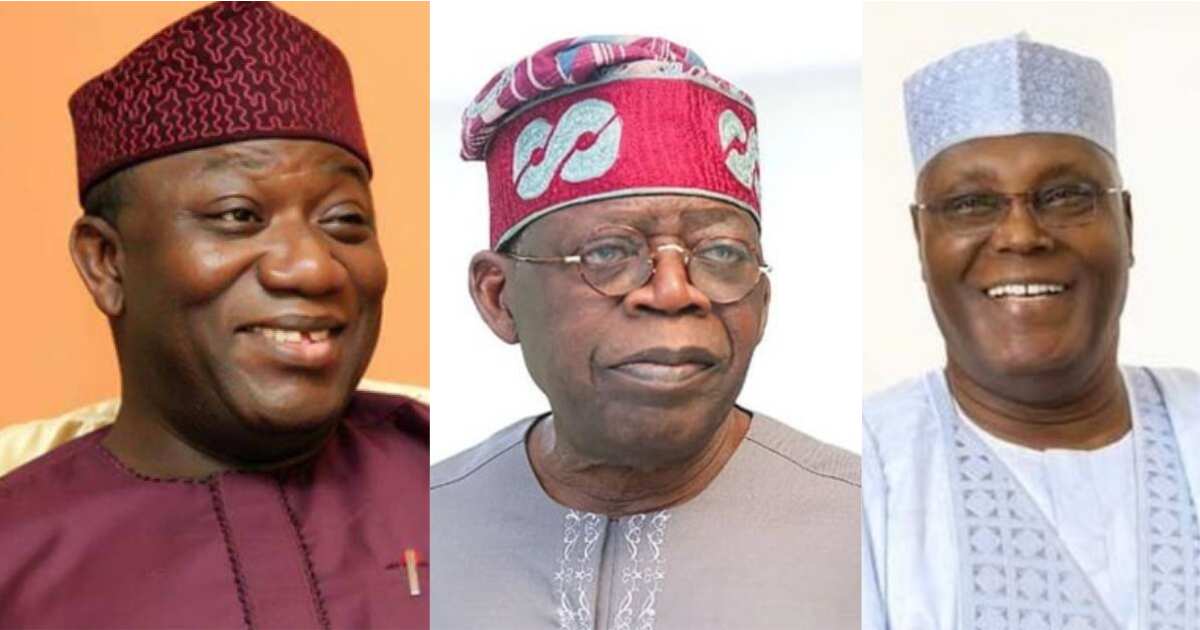 Legit.ng in this report takes a look at some of these politicians.

He was Vice President from 1999 to 2007 during the reign of President Olusegun Obasanjo.

He was the PDP presidential candidate in the 2019 general elections but lost to APC’s Muhammadu Buhari.

The APC National Leader, Asiwaju Bola Tinubu, has not openly declared his intention to run for the 2023 presidency but his allies, loyalists and supporters have commenced early campaigns for him to succeed President Buhari.

Recently, Rt. Hon. Rotimi Amaechi, a former two-term governor of Rivers State and current minister of transportation, stressed the need for the APC to respect the gentleman agreement to zone the presidency to the South in 2023.

This, pundits say, suggests he has ambitions for the seat.

Though Governor Kayode Fayemi of Ekiti State has not declared for president in 2023, remarks made recently by a leader of the APC in his state suggest that the former minister of mines and steel development may be gearing up for the exalted seat.

Penultimate Saturday, the Paul Omotoso-led APC caretaker committee endorsed the governor for the presidency in 2023.

Omotoso, who spoke through Ade Ajayi, the APC caretaker publicity secretary, at an event organised by Olusegun Osinkolu in Ayede Ekiti, Oye Local Government Area of the state, said the party would drag Mr Fayemi into the presidential battle forcefully if he refuses to join willingly.

Though the former minister of defence has not declared interest yet, he has, at different times, sought the presidential ticket of both the APC and the PDP but lost to President Buhari and former Vice President Atiku respectively.

Kwankwaso, who enjoys widespread support in Kano, is the leader of the Kwankwasiyya political movement.

Donald Duke was the governor of Cross River State and the SDP presidential candidate in 2019.

Duke had initially declared his intention to run for president in 2007 but stepped aside in favour of the late Umaru Yar’Adua.

With the deafening agitation for a Southern presidency in 2023, Rochas Okorocha, the former Imo State governor and Senator representing Imo West, qualifies as one of the candidates to fly the APC’s flag.

As a former chairman of the NGF, he may enjoy a nationwide reach and with the Igbo fighting tooth and nail to get the presidency, he might enjoy some advantage.

He was governor of Zamfara State from 1999 to 2007. He represented Zamfara West in the National Assembly and equally served as Deputy Minority Leader in the Senate.

He is currently a member of the ruling APC. Yarima is the only person to have declared his ambition to be president in 2023.

He was a founding member of the APC, after he and some other governors defected from the PDP and helped form the coalition that became the APC.

There are strong signals that Governor Yahaya Bello of Kogi State is among those eyeing Buhari’s seat in 2023.

Already, giant billboards have been erected in strategic locations in the state, urging him to run for president in 2023.

Governor David Umahi of Ebonyi State is also one of the politicians from the South East believed to be interested in Buhari’s plum seat in 2023.

Umahi, who has been a top chieftain of the PDP for many years, recently defected to the ruling APC in a strategic move to position him for the 2023 presidency.

Governor Bala Abdulkadir Mohammed of Bauchi State is a former Minister of the Federal Capital Territory (FCT) from 2010 to 2015.

Senator Mohammed of the PDP defeated an incumbent APC governor in the 2019 elections, thereby creating a major upset in a key State that has always voted for President Buhari.

The governor of Bauchi State has not shown any interest to run for the presidency but a civic group, Abuja Coalition of Youth and Women, has called on him to contest the elections.