– According to the man identified as @The_BeatOven, there was nothing wrong with a man admitting another woman is finer than his babe

A young man identified as @The_BeatOven, on Twitter, got the heat after he contributed his opinion to relationship matters.

According to him, there was nothing wrong with men admitting that another woman is finer than their babe. 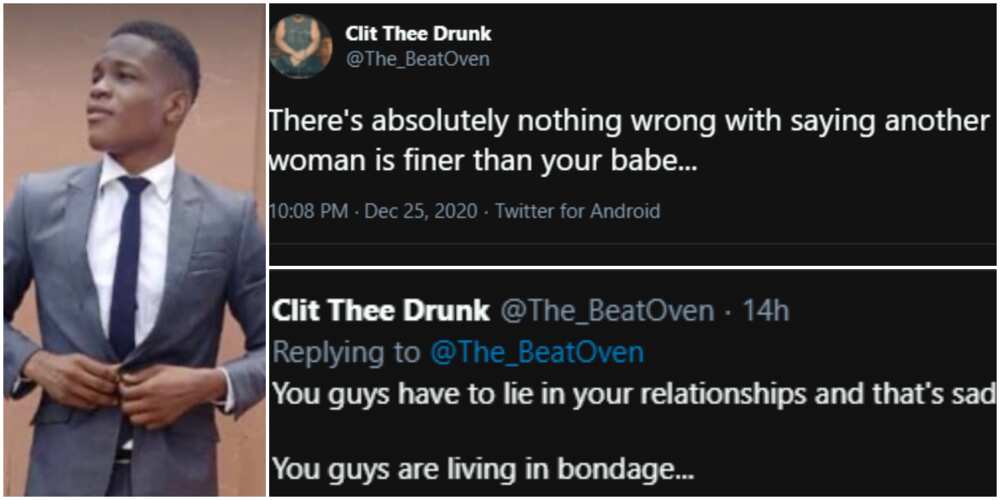 The young man also noted that it was sad that men had to lie in their relationships over an obvious fact.

@The_BeatOven capped his opinion with the revelation that men who could not express such an opinion freely are living in bondage.

“There’s absolutely nothing wrong with saying another woman is finer than your babe. You guys have to lie in your relationships and that’s sad You guys are living in bondage.”

The young man’s opinion did not go down well with a lot of people on the app, and they flooded the comment section with their opinion on the matter.

@captkennypeter stated that the statement was 100% wrong and beauty is in the eyes of the beholder.

@bolajibanks_ revealed that admitting another woman is finer is a bitter truth that must not be spilled.

@ajala_jaling0 said that people spill rubbish in the name of being blunt and should act like adults in some situations.

Meanwhile, Legit.ng reported that a Nigerian lady identified as @Reddishwine3 was not pleased with her man’s recent move.

She disclosed in a tweet that her man got lucky and won the sum of N2 million from betting.

Her grievance was that he gave her N20,000 instead of N1 million from the money. This action by her man forced her to label men “annoying”.

Street Gist: What if your husband is sleeping with your sister? | Legit TV