Contrary to his soldierly mien, President Muhammadu has always been described as a jovial man who always gives every atmosphere a soft stroke with his astonishingly hilarious antics and gestures.

And amazingly, an old video has surfaced on social media showing him in his good-humoured self to the amazement and joy of the observers.

The old video, which was probably shot during the first term of the president, was shared by Francis Ekpenyong, media aide to the technical assistant (new media) office of the vice president, Professor Yemi Osinbajo, in a tweet on Friday, December 25. 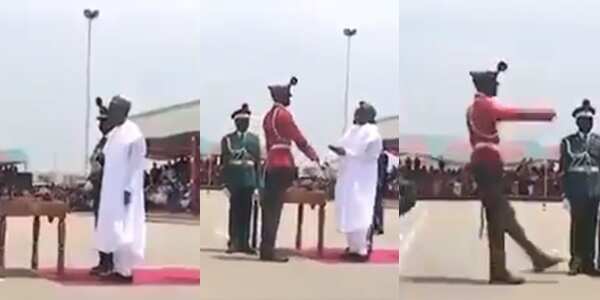 President Buhari seemed to be intimidated by the height of the “tallest man in the Nigerian Army.”
Credit:@ekpesfrancis.
Source: Twitter

In the 30-second clip, the president, who seemed to be at a Nigerian Army parade ground, was presenting awards to officers of the security force.

The climax of the moment was when an officer, who was adjudged to be the tallest man in the Nigerian Army marched toward the president to receive his award.

Buhari, who was himself nicknamed Dogo — (a pseudonym meaning tallest man in Hausa language) given to him because of his intimidating height, was surprised by the height of the tall officer.

Presenting the award to him, President Buhari hilariously raised his head up to have a look into the face of the officer before handing him the award.

The moment generated beautiful reactions capped by laughs from the spectators including the officer who lightly reacted before offering his last salute and marching off the scene.

The video-tweet has now generated over 400 likes and 100 retweets, with many social media describing the moment captured in the clip as one of the true character exhibitions of the president.

“You just have to love this “man”… Nigeria will surely succeed if we all unite & support the process”.

Another tweep, Steve, wrote: “Chai Baba Buhari. How I can meet this hilarious man someday.”

“When you know say you tall another person just make your height almost useless,” another social media user said.

Meanwhile, Legit.ng reported that gruesome massacre of at least 43 rice farmers in Borno state on Saturday, November 28, has again renewed the calls for the sack of the service chiefs — and also the resignation of President Muhammadu Buhari over rising insecurity.

But amid a whirlpool of reactions that trailed the recent dark moment in the history of the country, Governor Babangana Umara Zulum of Borno state rose higher again and became a cynosure of attention for his brilliant show of exceptional leadership.

In a viral video now shared on social media, the governor was at the centre stage of the Janazah (the Islamic last burial rite) of the dead farmers.