– The deceased was identified as the driver of the vehicle

Several journalists in the convoy of the Gombe State Governor, Inuwa Yahaya, were, on Thursday, involved in a fatal crash while on their way to Gombe from Bauchi. The driver of the crashed vehicle reportedly died.

The Gombe State Governor was in Bauchi on Wednesday for the 4th North-East Governors’ Forum Meeting which held in Bauchi State.

The Governor then stayed till Thursday to be a part of the groundbreaking ceremony for the foundation laying for the renovation and upgrading of the Bauchi State Government House which was laid by the Chairman of the Forum and Governor of Borno State, Professor Babagana Zulum. 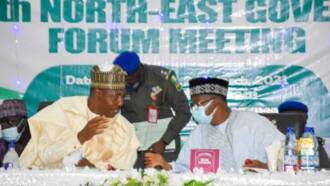 The meeting was also attended by the Adamawa State Governor, Umaru Fintiri, while the Yobe State Governor, Mai Mala Buni, and his Taraba State counterpart, Darius Ishaku, were represented by their deputies, Idi Gubana and Haruna Manu respectively.

The details of the crash are still sketchy as of the time of filing this report, but our correspondent learnt that the crash happened close to the boundary between Gombe and Bauchi.

The Director-General of Media and Information, Gombe State, Samaila Uba Misilli was said to be in the vehicle with other journalists who accompanied the Governor to Bauchi for the meeting when the incident happened.

It was also unclear if occupants of the car sustained any injuries but The PUNCH learnt that the Hummer Bus somersaulted three times.

When contacted, the Sector Commander, Federal Road Safety Corps, Bauchi State, Yusuf Abdullahi, who confirmed the crash said he could not give full details of the crash because it happened in Gombe State territory.

Abdullahi who said that rescue operation was currently ongoing promised to furnish our correspondent with more details after contacting his colleague, the Gombe State FRSC Sector Commander.