– There was a mild drama in the Senate on Tuesday, February 23 when a senator from Kogi state made deriding comments against a sitting governor

– Senator Smart Adeyemi representing Kogi west senatorial district, threw caution to the wind while making a contribution on the floor of the Senate

– It took the intervention of Senate President, Dr. Ahmad Lawan, to call the senator to order

The All Progressives Congress (APC) senator from Kogi state made the comment on the floor of the Nigerian Senate on Tuesday, February 23.

Adeyemi, a former national president of the Nigerian Union of Journalists, described the Abia state chief executive as a “champagne drinking man.” 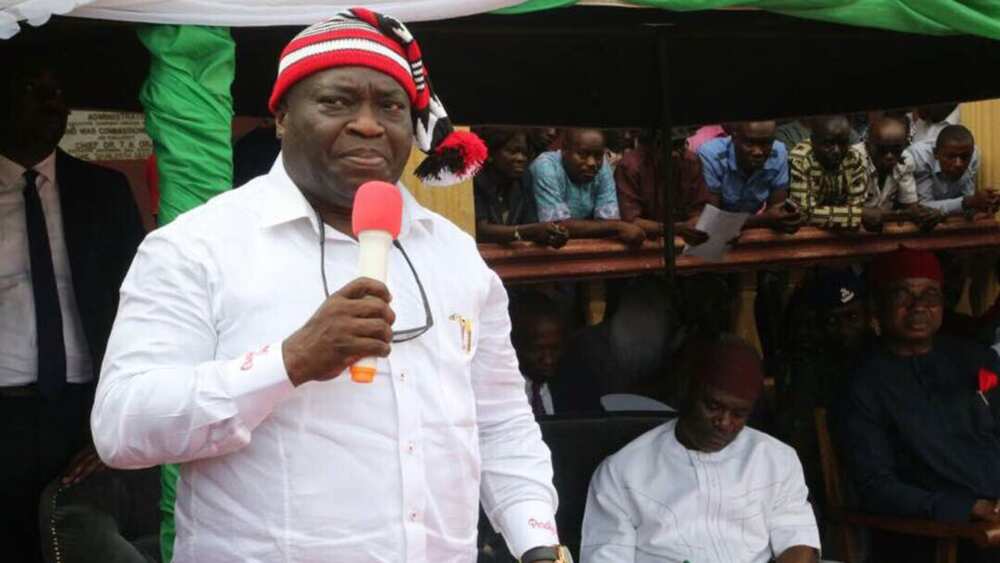 Governor Ikpeazu is yet to respond to the comments of the senator.
Photo credit: @GovernorIkpeazu
Source: Twitter

The Kogi senator was contributing to a motion on Safe School Initiative in Nigeria when he blurted out that Abia is governed by “drunkards” after comparing the south-east state to his home state of Kogi.

The video of Senator Adeyemi’s outburst was shared on social media by African Independent Television.

“In some states where we have highly intelligent people, highly educated people, very enterprising people, like Abia, they are governed by drunkards. The governor of Abia is a champagne drinking man.

He was, however, cautioned by the Senate President, Dr. Ahmad Lawan over the comments.

Checks reveal Senator Adeyemi was responding to a social media post allegedly linked to the Senate minority leader who is from Abia, Enyinnaya Abaribe.

In the post, Abaribe was said to have cast aspersions on Kogi state governor, Alhaji Yahaya Bello.

Abaribe, however, stated that he did not make such a post while expressing disappointment over Adeyemi’s outburst.

Speaking further, a disappointed Abaribe expressed shock over Adeyemi’s comment and urged his colleague to tender an apology to the governor of Abia.

Recall that Senator Adeyemi recently announced his intention to sponsor bills for the enactment of the Mosaic law which will help curb corruption.

The senator said the law will discourage people from stealing, adding that if the hands of public officers in the country are cut off, they will not steal.

Meanwhile, Senator Adeyemi has disowned campaign posters indicating that he is seeking to run for governor in Kogi state in 2023.

Adeyemi faulted the online publications making the rounds and blamed his detractors for linking him to the 2023 polls.