Dustin Poirier has defeated Conor McGregor in a lightweight bout at the UFC 257 pay-per-view event in Abu Dhabi.

Poirier unleashed a flurry of punches which left the Notorious stranded against the fence before getting knocked down as the referee stopped the fight.

The American dominated the Irishman with calf kicks in the first round which had an adverse effect on his performance in the second round.

The Diamond who lost Conor six years ago was back in his best shape to avenge his defeat and he did it in style.

The fight started with a couple of calf-kicks and clinches in the opening seconds and McGregor would have to pay for it later on in the fight. 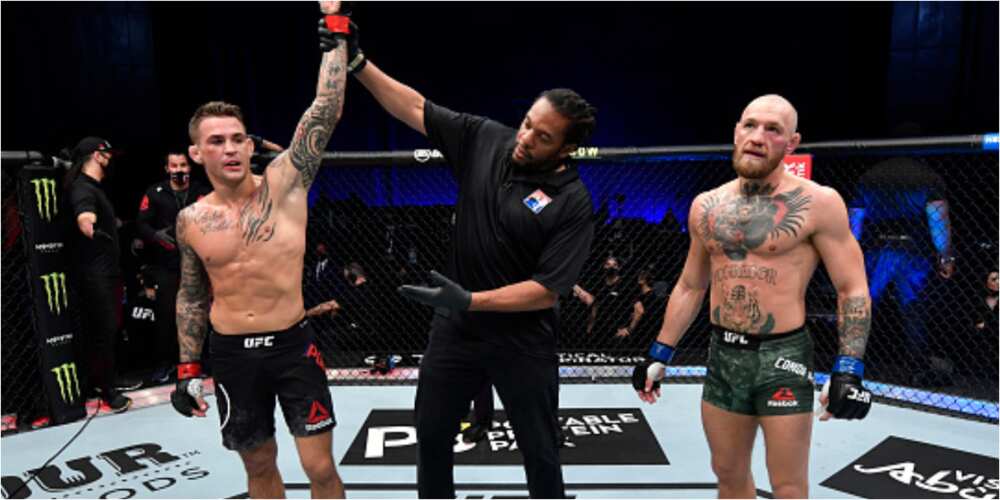 Poirier has now taken his professional record to 27-6-(1) leaving McGregor with 22 wins and five defeats in his career.

After the fight, the American said he did not mind both of them completing a trilogy in the near future.

On the other hand, McGregor blamed his inactivity in the mixed martial arts for a while as the cause of his easy loss to Poirier.

Meanwhile, Legit.ng had earlier reported that Khabib Nurmagomedov has cemented his name in UFC’s Hall of Fame following his second-round stoppage of Justin Gaethje.

The lightweight champion made his fight over the hard-hitting Gaethje look easy as he submitted the American via a triangle in the second round. Khabib who recorded his 28th victory without a defeat in Mixed Martial Arts immediately fell to the ground in tears as he mourned his father who passed on earlier in the year due to illness.

Legit.ng also reported that Israel Adesanya has moved up in with class in a bid to become a UFC two-weight division champion.

It has been confirmed that the fight will hold on March 6, 2020, in a UFC 259 pay-per-view event with the location and venue yet to be announced.