– Surprisingly, no Liverpool player made the squad despite them winning the title last season

– Bruno Fernandes, Bukayo Saka as well as Harry Kane are named in the list

Fans of WhoScored have voted for players to make-up Premier League team of the season with no member of the Liverpool squad making the squad.

The English top-flight season is already half-way gone and fans of the platform have voted for the stand out performers so far.

Despite winning the title in spectacular fashion last season, Liverpool have had a bad start to this season as they now find themselves in fourth position.

Surprisingly, two Chelsea players make the cut despite being eighth.

Check out the rest of the team below. Meanwhile, Arsenal manager Mikel Arteta has defended embattled Nicolas Pepe and Willian after both players failed to inspire Gunners past the fourth round of the FA Cup.

Both players who have been in and out of the squad, were introduced in the FA clash against Southampton at St. Mary’s, but they failed to impress. 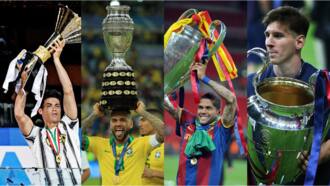 Defending champions Arsenal crash out of this season’s competition having lost to hard-fighting Southampton in the fourth round of the competition on Saturday afternoon, January 23.

However, Legit.ng earlier reported that Jurgen Klopp will not win trophies for Liverpool, according to a Reds’ fan after the embarrassing defeat to Burnley at Anfield, Sport Bible.

The Merseysiders’ remarkable three-year winning streak was stopped by visiting Burnley following Ashley Barnes’ penalty. And Klopp has blamed himself for his side’s failure to score for a fourth consecutive Premier League game.

One fan named David called talkSPORT to complain that he thinks Klopp has taken the team as far they can go and might not win any more trophies for the club.