Young lady celebrates US citizenship, many react as she shares adorable photo

Your conduct is reprehensible and condemnable, judge blasts EFCC

– At half time, the Burnley boss was adamant Fabinho should have been sent off after an incident with Ashley Barnes

Liverpool manager Jurgen Klopp was involved in a heated bust-up with his Burnley counterpart Sean Dyche at half time as the Clarets secured a shock 1-0 win at Anfiield. Jurgen Klopp and Sean Dyche have a long history of feuding in the Premier League. Photo by Jon Super
Source: Getty Images

The first half of the encounter was largely uneventful but things heated up when Liverpool’s make-shift center-back Fabinho challenged for an aerial ball with Burnley’s Ashley Barnes.

In the incident which went viral online, Fabinho seemed to aim a kick at Barnes; something which sparked a mini-battle between the two sets of players.

Fabinho was subsequently given a yellow card but the incident had to be reviewed by the VAR for a possible red card over violent conduct.

The fact that the Brazilian stayed on the pitch seemed to anger Sean Dyche, who made his feelings known to Jurgen Klopp at half time.

Klopp, who seemingly did not take Dyche’s sentiments lightly, could be seen doing a double take before turning back and following the Burnley boss while waving his hands angrily in the air.

After the game, Klopp tried to play down the whole incident by saying it was “nothing”.

But Dyche, whose Burnley side inflicted a first defeat to Liverpool at Anfiend in more than three years, seemed to suggest there was a long-standing rivalry between himself and his counterpart Klopp. “You know when we come to these places, we are allowed to actually fight and are actually allowed to try and win. That’s all it was.”

The two managers have had mild feuds in the past as well, with the last viral incident coming in 2018 at Turf Moor.

At the time, Liverpool beat Burnley 3-1 but Dyche was overly irritated by Klopp’s antics like calling for Burnley players to be carded throughout the game.

Dyche also disagreed with Klopp’s suggestion to the Premier League to have five substitutions to cope with unforeseen isolation cases and the congested fixture schedule. 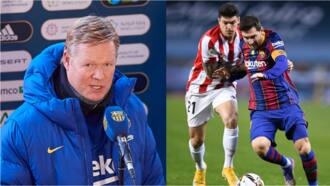 Liverpool went into this game with the hope of keeping the pressure on Manchester United who are currently topping the Premier League table, but they were unable to get good result at Anfield.