– A young man, Femi Dapson, has taken to Twitter to share his achievement of buying a new car in 2021

A young Nigerian man identified as Femi Dapson has got amazing attention on Twitter after he posted a photo of his new ride.

He said that it is his own way of starting the new year. Posting the photos on Twitter, many people congratulated him on it.

The man also showed off the dashboard of the vehicle. In the first frame of his photo, the car’s front view is seen as he blotted out its number plate.

As at the time of writing this report, his post has gathered over 4,000 likes with hundreds of retweets. 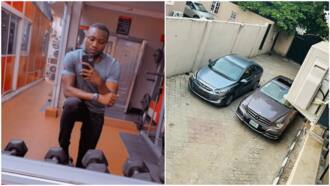 “For this tweet now unbelievers go still ask how him take buy am and if you ask may God bless you and make people ask you too how you take do am.”

“Allah will bless it for you and protect you from envy eye.”

“Congrats… Did the display screen come with the car or you installed it?”

Meanwhile, Legit.ng earlier reported that a Nigerian influencer with the handle @UnclePamilerin showed off his garage of cars on social media.

He said he started from a very humble place, adding that more will come soon. In his garage is a Mercedez Benz and Hyundai which are parked side by side. 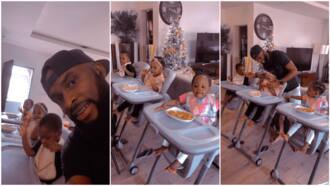 Since his tweet went live, many have massively reacted to it. Most of his followers were eager to know where he got his money from at a time many are complaining about economic hardship.