Just in: Chelsea board make huge decision over Frank Lampard after 2-0 loss to Leicester City

Chelsea are desperate in saving their season following their stunning 2-0 defeat to Leicester City, the club’s board are set to take a drastic decision over manager Frank Lampard.

Reports from the Stamford Bridge have it that Chelsea are desperately searching for an experienced manager following their poor run of form in the Premier League.

The loss to the Foxes is their fifth if eight matches and there are concerns over Lampard’s capacity to handle the squad.

Confidence in the team has visibly plummeted and the manager is heavily criticised over the situation at the club which dates back to their earlier loss to Manchester City.

It was gathered that club owner Roman Abramovich is already contemplating the next move and according to top outlet The Athletic, only experienced managers are now being considered.

Lampard’s future now hangs in the balance as it is unclear if he would even make it to their next game – an FA Cup tie against Luton Town on Sunday, January 24.

Thomas Tuchel, recently sacked from Paris Saint-Germain, is the bookies’ favourite to take over. But Massimiliano Allegri has also been linked, with the Italian, keen on taking a job in the Premier League after learning English over the past two years.

Chelsea, on the other hand, are languishing in eighth and Lampard is coming under serious pressure.

The manager said, as cited in Mirror:

“It’s not where we want to be.

“I am worried. From the form we were in to get so quickly in to the form we’re in now, even with the Fulham win (on Saturday) and some other wins in there, we should be better than losing five in eight.” 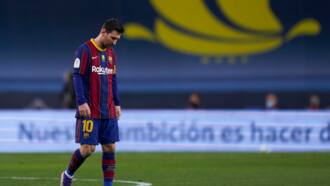 Meanwhile, Legit.ng earlier reported that Man United fans have been sent into a meltdown after Cristiano Ronaldo appeared to drop have a huge transfer hint on Instagram.

Ronaldo, who is facing an uncertain future at Juventus, has been widely linked with a transfer move away from the Serie A giants.

Even at 35 years of age, the Portuguese talisman is still going strong, shining for Juve amid a difficult season under Andrea Pirlo.

The Italian side are thought to be keen to offload Ronaldo as reports claim they may have to let him go at the end of the season.