It was a very emotional moment for the children of former President Donald Trump as they all gathered to bid their father farewell.

Trump’s presidency finally came to an end after a single term as the leader of the United States.

According to DailyMail, Ivanka, Don Jr, Eric, and Tiffany were all spotted fighting back tears watching Trump deliver his final speech as the president of the United States.

The siblings who stood along with their respective partners’ at Joint Base Andrews in Maryland tried to contain themselves and maintain a calmer attitude but the tears could be seen rolling down their cheeks during the goodbye rally. During his remarks, the 45th President thanked his voters for supporting him and his administration for the last four years.

The former Republican leader accompanied by his wife, Melania departed Washington, D.C. on Air Force One for the last time before leaving for Palm Beach, Florida.

This is coming after Trump finally departed the White House for the last time. The former president thanked reporters at the White House and said it had been the ‘honor of a lifetime’ to serve as president.

In an address to Americans, the outgoing leader who in small ways has rocked the entire nation with his rather bizarre remarks and stunning decisions praised his administration for its groundbreaking achievements. 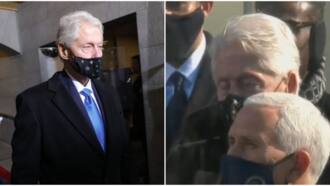 In a related development, former Vice President Mike Pence did not make any plans to attend the farewell ceremonies of the outgoing president.