– Wednesday, January 20 is Donald Trump’s final day as the president of the United States

Outgoing US President Donald Trump has pardoned rappers Lil Wayne and Kodak Black on his final day in office. The White House reportedly announced early on Wednesday, 20 January that Trump granted a pardon to Wayne and a commutation to Kodak Black.

Lil Wayne had pleaded guilty to illegal gun possession on December 11, 2020, following a December 2019 arrest. He was facing 10 years in jail. He was due to be sentenced soon.

The rapper caused a stir on social media towards the end of 2020 when he publicly endorsed Trump a few weeks before the US presidential election. Some people shared that the artist had sold Black people as they believed that Trump did not care about them. CNN reports that Kodak Black had been arrested in April 2019 on gun and drug charges while trying to enter the US from Canada. He pleaded guilty in that case in March 2020. The news outlet reports that Kodak’s sentence was due to be served concurrently with another 2019 weapons charge. He had been sentenced to more than three years for it.

Bloomberg reported on Tuesday that White House staff had prepared paperwork to pardon Lil Wayne, whose real name is Dwayne Carter, according to the people, who asked not to be identified because Trump has made no announcements. At the time, the publications shared that it wasn’t immediately clear who else is poised to get clemency.

Social media users have shared their thoughts following the news that Trump has pardoned the rappers. check out some of their comments below:

“His only actual help to the black community.”

“I want some Kodak music so yeah I support. But he loves it there he’ll eventually go back.”

“My thoughts on this is thanks cause Wayne doesn’t need to be in that place.”

“He only did it for his personal image. Happy for them though.”

In related news, Legit.ng reported that Lil Wayne tweeted out his faith in the outgoing President Donald Trump during the build-up to the US presidential election in 2020. Lil Wayne took to Twitter to post a photo after having had a meeting with Trump which he said had been successful.

The artist mentioned how he believed Trump was going to have a positive effect on criminal reform and the Black community, as well as implying that the president had already accomplished much on those fronts. 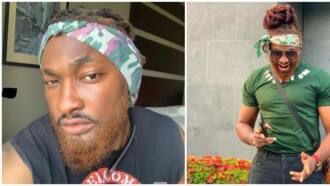 Media personality Uti says only single people should flirt with him

Twitter users took issue with a number of aspects of the news and replied to Lil Wayne accordingly. Some attempted to reason with the artist’s actions and explain the significance of endorsing a presidential candidate. Some posted that they expected this from Lil Wayne, given his previous comments on racism.

Others didn’t bother and just told Lil Wayne that his behaviour meant that they were no longer fans of his.