Lionel Messi has been slapped with a two-match ban following the off-the-ball incident with Athletic Bilbao star Asier Villalibre in the Supercopa final.

With seconds left to play in the match, Messi seemed to have struck Villalibre in the face when trying to make a run back to defend. 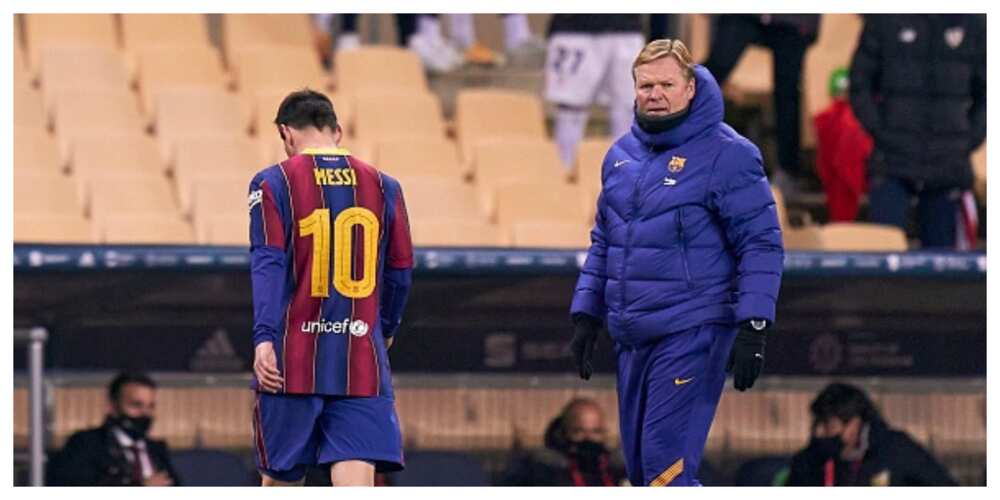 Barcelona were trailing Athletic by 3-2 during extra time when the incident occurred as the Argentine was sent into an early shower as he was shown a red card.

Bilbao won the game and lifted their first trophy in since 2015 but La Blaugrana are not going down without a fight.

The Camp Nou outfit are set to appeal the two-game suspension handed to their star player after the referee released his report for the game.

“Striking an opponent with his arm with excessive force while the ball was in play but not within a playable distance.”

Messi has never been sent off in his entire Barcelona career and the 33-year-old will have to wait longer to lift his first trophy as captain of the club.

Meanwhile, Legit.ng had earlier reported that Lionel Messi was shown a red card in Barcelona’s 3-2 loss to Athletic Bilbao in the Supercopa final played in Sevilla.

Messi was involved in an off-the-ball incident with Asier Villalibre and after the referee checked the VAR, the Barca captain was given his marching orders.

It is only the third time in his career Messi has been sent off and the first time for Barcelona.

The Argentine was shown a straight red for a foul on Asier Villalibre as he looked to have punched the forward who had busted unto his path.

It was Messi’s first-ever red card in his Barcelona career in his 753rd match for the club, but Koeman has suggested that it is normal for the player to react in such a manner.