– The attorney general of the federation and minister of justice, Abubakar Malami, has released a statement about the allegations against him

– A spokesperson, for Malami, Umar Gwandu challenges the credibility of the allegations

– Gwandu distances the minister from any fraudulent activity

The attorney general of the federation and minister of justice, Abubakar Malami, has faulted reports which alleged that he collected bribe from the minister of Niger Delta Affairs, Godswill Akpabio.

Malami in a statement issued by his spokesperson, Umar Gwandu, on Friday, January 15, described the report as false, The Guardian reported. 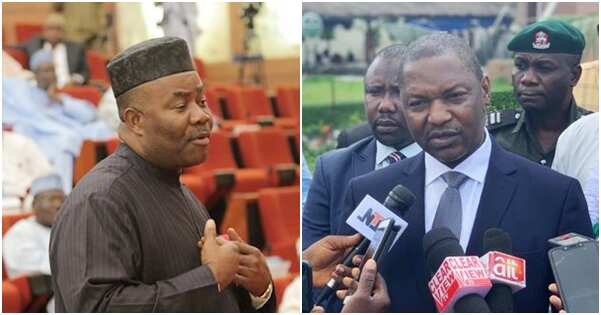 The statement said the report is a fictitious and malicious publication by alleged mischief-makers.

The spokesperson of the attorney general pointed out that the story is an attempt to cast doubts on the reputation of Malami.

“The minister, hereby, makes an outright denial of the report in its entirety.

“The Minister has not collected and does not intend at any time to receive any gratification from any dealing in discharging any function he is constitutionally empowered to perform.”

According to Daily Nigerian, Malami’s spokesperson asked those behind the article to approach relevant security and law enforcement agencies with proof of wrongdoing on the part of the minister if they had any evidence.

Meanwhile, a former lawmaker, Junaid Mohammed, said Bishop of the Catholic Diocese of Sokoto, Matthew Kukah, was right to say that President Muhammadu Buhari had been promoting nepotism in his appointments

According to him, Kukah’s claim that the military would have taken over if it was a southern president acting the way Buhari did was not factual.

Mohammed insisted there would not have been a coup if it was a southern president.

Daily Trust reported that the minister of communications and digital economy, Ali Isa Ibrahim Pantami directed the immediate suspension of the staff on Sunday, January 3.

The minister’s directive was contained in a statement issued by the NIMC, adding that the staff were involved in extortion of applicants at the NIMC Bauchi and Kaduna state offices.