A Nigerian man with the Twitter handle @Uncle2Triplets set the whole of Twitter abuzz after sharing adorable photos of triplet babies as they ate.

In a post titled “Triplet Day”, photos showed him helping babysitting the kids, making sure that they are properly fed.

One of the frames has him posing for a selfie with the kids making cute faces in the background. Other photos show the kid sitting on their foldable meal table.

Legit.ng cannot, however, authoritatively say if the man is their father or their uncle as his Twitter handle suggest.

As at the time of writing this report, his tweet has gathered more than 13,000 with hundreds of comments.

Nigerian nurse relocates to UK, says country’s evil to her is enough

“You don run DNA test to confirm their paternity. I’d hate to hear stories that touch the heart many years after.”

“Beautiful ones. Lord, I am not asking much because I know you can do all things. I receive my triplets too in the Name of Jesus. Amen.”

“Am also triplets but we never enjoyed being doted on likes this. Amazing uncle.”

Meanwhile, Legit.ng earlier reported that A Nigerian man, Hamzat Lawal, has taken to Twitter to celebrate the birth of his three children, saying the blessing happened three months ago.

Hamzat went ahead to ask for God’s continued protection and blessings for his home. He also prayed that may all those wanting the same fruitfulness will get theirs too soon. 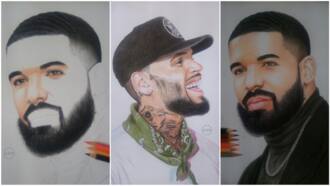