– Real Madrid have been dumped out of the Spanish Super Cup

Two first-half goals from Raul Garcia were all Athletic Bilbao needed to progress to the final of this year’s Spanish Super Cup.

Victory over the La Liga defending champions means they will face Barcelona in the next stage of the championship.

Ronald Koeman reached the last stage of the competition following their 3-2 triumph over Real Sociedad on penalties having played 1-1 in the regulation period.

The defeat also means that coach Zinedine Zidane’s men will not be able to contend for the title they won last year.

Garcia opened the scoring for the visitors in the 18th minute after putting the ball under Thibaut Courtois’ arms from close range having being set-up by Dani Garcia in the build-up. 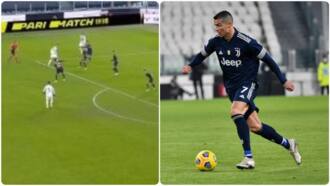 The away team intercepted a pass from Los Blancos star and immediately turned it into an attack – a move which paid off eventually.

Marcelino García Toral’s men doubled their lead with less than seven minutes before half time through a penalty kick.

Garcia once again stepped up to give his side an advantage in the opening half with a sublime effort from the spot.

However, Karim Benzema was able to reduce Real’s deficit in the 73rd minute through a close-range strike.

The Frenchman benefited from a superb assist from Casemiro before punishing Unai Simon towards the end of the match.

But his second-half goal was not enough to help them avoid outright defeat in the cup competition.

Legit.ng earlier reported that German League giants Eintracht Frankfurt have completed the signing of Real Madrid forward Luka Jovic on loan until the end of the season.

The 23-year-old has struggled for playing time since he moved to Santiago Bernabeu in a deal valued at around €60 million in 2019. 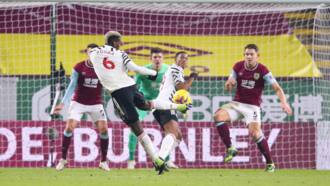 And 18 months later, the Serbian has made just 32 appearances with two goals and two assists for Los Blancos across competitions.