– Solomon Kalou and his wife welcome their baby girl

– The Ivorian shared the good news on his official Instagram page

Former Chelsea star Solomon Kalou has taken to social media to announce the arrival of his baby girl with his partner Karina Ferreira.

The 35-year-old who currently plays for Brazilian club side Botafogo posted the feet of the newborn on his official Instagram page.

Kalou was part of the golden Blues team that won the UEFA Champions League title in 2012. He accompanied the picture with a post that says:

“My Angel JN. God’s blessings come in many shapes and forms” 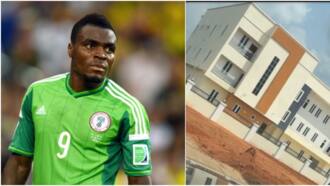 Solomon Kalou and his Chelsea teammates during their title parade after their Champions League triumph in 2012.
Photo by Darren Walsh/Chelsea.
Source: Getty Images

The post has generated so much engagement with one of his former boss becoming one of the first set of people to congratulate the player.

Kalou left Chelsea for French League outfit Lille after helping them conquer Europe some nine years ago after which he joined German side Hertha Berlin in 2014 and spent six years with them.

The Ivorian won the Premier League once during his six-year reign at Stamford Bridge with four FA Cups and other silverware.

He was also part of the Ivory Coast national team that won the 2015 Africa Cup of Nations championship staged in Equatorial Guinea.

Legit.ng earlier reported that Cristiano Ronaldo is one celebrity who, aside football, is well known for his style and class as the legend has reportedly spent over £2.6million just on jewellery.

The Juventus striker and his girlfriend Georgina were special guests at the recent Globe Soccer Awards in Dubai where they flaunted their jewellery.

The Portuguese striker has £600,000 (over N310million) worth of ice all on one hand as he accepted the award for player of the century.

Also, Legit.ng reported that Cristiano Ronaldo who currently plays for reigning Italian champions Juventus has topped the list of 10 big players who scored most penalties in the year 2020.

Although the year 2020 had come and gone and sporting activities were seriously affected during this year due to the outbreak of COVID-19 which has been a serious problem to the whole world.