Manny Pacquiao appears ready to hit the boxing rings once again but this time he will reportedly faceoff with UFC fighter Conor McGregor.

The 42-year-old who is also a senator in his home country is doing everything he can to avoid a battle with fellow world champion Errol Spence.

Pacquiao, widely referred to as PacMan has not engaged in any competitive bout since the summer of 2019 when he displaced Keith Thurman at the MGM Grand Garden Arena in Las Vegas. 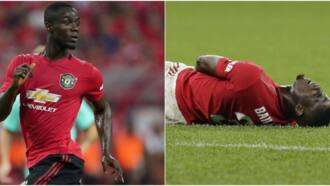 Tension at Old Trafford as Man United sweat over fitness of 1 big player ahead of Burnley, Liverpool ties

He was expected to return to the rings in 2020 but the outbreak of deadly coronavirus denied him a chance to Mikey Garcia and Terence Crawford. Mannu Pacquaio before his fight against Floyd Mayweather in Los Angeles in 2015.
Photo by Kyodo News.
Source: Getty Images

Meanwhile, both he and the UFC star are currently negotiating but no agreement has been reached this year. However, despite McGregor returning to the UFC next weekend, Pacquiao insists he is his No.1 target.

“They’re (Spence and Crawford) my options, but right now I want to experience fighting an MMA [mixed martial artist]. I will also donate a big portion of my income to Filipino Covid-19 victims.”

McGregor’s only experience in a professional boxing ring was Floyd Mayweather in 2017 when the American defeated the Irishman in the 10th round to earn his 50th victory.

Since then McGregor has fought just twice in the cage, losing to Khabib Nurmagomedov before stopping Donald Cerrone last year.

And ahead of his return against Dustin Poirier on Saturday week, his manager confirmed his intention to fight Pacquiao. ” Audie Attar told Dubai radio: 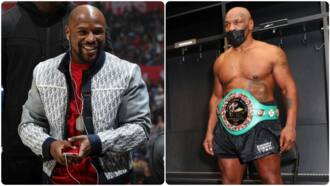 “I definitely believe it’s inevitable for 2021; both fighters want it, that’s the key.

“You can’t make something happen or orchestrate it or choreograph it – which is the buzzword of this interview – you can’t fake that.

“If one side wants it and the other doesn’t, it’s not going to happen. But when both fighters want that fight to happen, why wouldn’t it happen?

“If the fans want to see it – that almost guarantees that it’s going to happen, right? As there’s enough interest to develop something there.”

Legit.ng earlier reported that Conor McGregor has confirmed he will fight against Manny Pacquiao in the boxing in January 2021.

The UFC star is set for another epic cross-fight clash against another prolific boxer Pacquiao in the Middle East.

The Notorious who recently announced in the summer that he has quit the Mixed Martial Art (MMA) scene was asked about fighting The Pac Man. 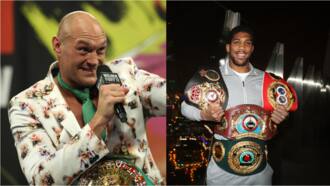