Another impeachment? Calls to remove Trump thickens as US speaker asks vice president to do this

House Speaker Nancy Pelosi said Sunday the House will proceed with legislation to impeach President Donald Trump as she pushes the vice president and the Cabinet to invoke constitutional authority force him out, warning that Trump is a threat to democracy after the deadly assault on the Capitol.

The House action could start as soon as Monday as pressure increases on Trump to step aside. A Republican senator, Pat Toomey of Pennsylvania, joined Republican Sen. Lisa Murkowski of Alaska in calling for Trump to “resign and go away as soon as possible.”

A stunning end to Trump’s final 10 days in office was underway as lawmakers warned of the damage the president could still do before Joe Biden was inaugurated Jan. 20. Trump, holed up at the White House, was increasingly isolated after a mob rioted in the Capitol in support of his false claims of election fraud.

“We will act with urgency, because this President represents an imminent threat,” Pelosi said in a letter late Sunday to colleagues. FULL LIST: US presidents who refused to attend their successors’ inauguration – as Trump is set to join (photos)

“The horror of the ongoing assault on our democracy perpetrated by this President is intensified and so is the immediate need for action.”

On Monday, Pelosi’s leadership team will seek a vote on a resolution calling on Vice President Mike Pence and Cabinet officials to invoke the 25th Amendment, with a full House vote expected on Tuesday.

After that, Pence and the Cabinet would have 24 hours to act before the House would move toward impeachment.

During an interview on “60 Minutes” aired Sunday, Pelosi invoked the Watergate era when Republicans in the Senate told President Richard Nixon, “It’s over.”

“That’s what has to happen now,” she said.

With impeachment planning intensifying, Toomey said he doubted impeachment could be done before Biden is inaugurated, even though a growing number of lawmakers say that step is necessary to ensure Trump can never hold elected office again.

“I think the president has disqualified himself from ever, certainly, serving in office again,” Toomey said. “I don’t think he is electable in any way.” 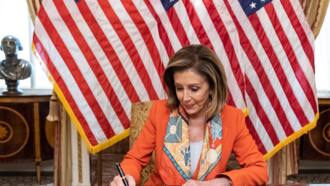