Barcelona who are Spanish giants are reportedly interested in the signing of Leicester City star Sidnei Tavares and the Catalans are ready to convince the Premier League club with big offer.

Sidnei Tavares’ current contract with Brendan Rodgers’ side will expire at the end of the season and there has not been any talk of extending his deal with the Foxes.

Tavares teamed up with Leicester’s U23 squad last summer and he has been impressive for the side ever since then.

The 18-year-old made a huge impression in pre-season with the senior side in which Brendan Rodgers who is the head coach of the Foxes was happy with his performances. 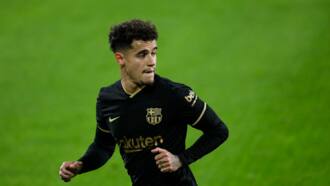 According to the report on UK Sun, Sidnei Tavares is the cousin of former Manchester United winger Nani.

Barcelona chiefs are trying to bolster their squad this month so as for them to be able to fight for the Spanish La Liga title this season.

Last term, the Catalans failed to win any trophy in all competitions and also suffered an embarrassing defeat in the Champions League against Bayern Munich.

Ronald Koeman and his wards are currently occupying fifth position on the Spanish La Liga table with 28 points after 16 games played so far.

Atletico Madrid are topping the Spanish La Liga table with 38 points after same number of games played this term. Earlier, Legit.ng had reported how Barcelona who are top Spanish giants will now be unable to see Brazilian midfielder Philippe Coutinho in action for the next three months after undergoing surgery on ankle injury.

Having being loaned out last season to Bayern Munich where he won the Champions League, Philippe Coutinho fought his way back into Barcelona’s first team this term under Koeman.

So far this season in the Spanish La Liga, Philippe Coutinho has started eight games for Barcelona and the Brazilian has made 14 appearances in all competitions.

Coutinho has scored three times for the Catalans this season as Barcelona are currently struggling to climb to the top four on the League table.

The former Liverpool man has been linked with a Nou Camp exit but has remained in Spain for now despite the heavy speculation.