This is what will happen to PDP in Enugu in 2023, APC chieftain reveals

– Ayogu Eze, a chieftain of the APC has declared that the party would take over Enugu state in 2023

– The former governorship candidate made this known on Sunday, January 3

A chieftain of All Progressives Congress (APC) in Enugu, Ayogu Eze, has declared that the party would defeat the ruling Peoples Democratic Party (PDP), in the state, during the next general election.

The Nation reports that Ayogu, who was the governorship candidate of the APC in the 2019 election in the state, said the party would take over the Government House in 2023.

Legit.ng gathered that Ayogu made the statement when he presented foodstuff and cash to party members for the New Year.

The leadership of the All Progressives Congress (APC) met at the party secretariat, Abuja. Credit: @OfficialAPCNg
Source: Twitter

“We want to strengthen the party structure at the grassroots so that in 2023, APC will form the next government in Enugu state. 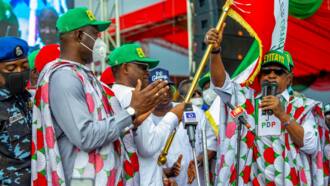 “However, we must show that we are serious and committed. I must identify with the reservations expressed by the party leadership; we have the manpower, we have serious personalities but they don’t come close to the party, there is no way we can build a party when all our big guys are not coming together.”

Eze added that a president of Igbo extraction was possible with the commitment of members from the region.

“We need to work for it as it will not just drop from the roof. We have to work for it and it means building alliances, building friends because it is not something that we here can do alone. So, let us not try to be cagy and shut our doors.”

Meanwhile, Legit.ng had previously reported that Jonathan Vatsa, a chieftain of the All Progressive Congress (APC) in Niger state, asked the federal government and Arewa youths to leave Bishop Mathew Kukah alone over his Christmas message.

It was reported that said that the fiery cleric’s Christmas message has continued to generate mixed reactions from Nigerians both at home and abroad.