– Popular Nigerian businessman, Emeka Okonkwo aka E-Money, has come under scrutiny for the umpteenth time

Nigerian businessman, Emeka Okonkwo, was recently trolled on social media by a man who wanted to know the source of his wealth.

The socialite who is also the junior brother to popular singer, Kcee, has been known to live a very lavish lifestyle that he does not hesitate to show off on social media.

Just recently, the businessman made one of his usual showy posts where he was seen dancing with Kcee at their hometown where they spent the festive period. He also used the opportunity to wish fans a happy new year. 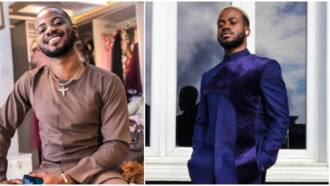 Taking to the comment section, one internet user identified as Proudly_Zimbabwean_Zim1, claimed that E-Money’s source of wealth wasn’t clean and attributed it to fetish sacrifices.

According to the troll, people who pretend to be rich are guilty of sacrificing human body parts. He added that he gave E-Money one year and that fans would what was going to happen. He also likened him to late Zimbabwean billionaire, Ginimbi.

In response to the troll’s claims, E-Money asked God to forgive him.

See a screenshot of their exchange below: 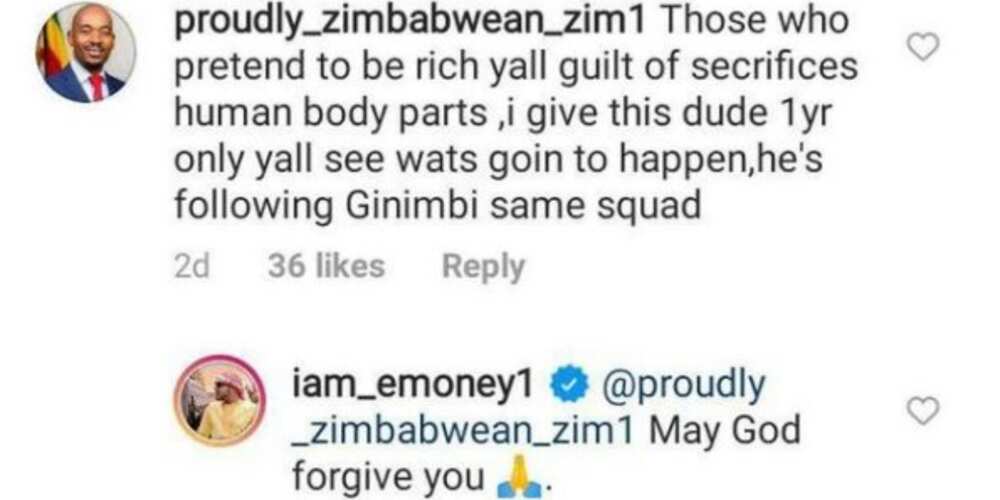 Nigerian big boy, E-Money, has asked God to forgive a troll who asked for the source of his wealth.
Photo: @iam_emoney1
Source: Instagram

In other celebrity news, Legit.ng earlier reported that BBNaija 2019 star, Tacha, was of the opinion that life was so simple but people deliberately made it hard.

The reality show star who gained quite a controversial reputation while on the BBNaija show talked about people who bagged enemies everywhere they went. Explaining further, Tacha added that this life was only one and that people should just live and breathe.