It all started when Vee took to her Twitter page to let her fans know that her happiness can never be attached to money.

According to her, there have been times when she couldn’t even pay for her bus ride home. However, she noted that she was healthy and she had a loving family. Vee revealed that those things made her happy as she noted that she knows and understands what she’s talking about.

A follower called @_Chinaah then asked the Lockdown star if she should ignore Bobrisky’s advice.

The male barbie shared a number of videos on his page telling young women how to cash out in 2021. According to the controversial influencer, money has to be made this year.

@_Chinaah seemed to have needed some clarification, hence, her question to Vee.

Reacting to her follower’s question, Vee said she loves Bobrisky but noted that his advice is personal to him.

According to the reality star, Bobrisky’s advice works for him. She told @_Chinaah that the advice may not work for her.

Vee then advised the young lady to hustle the way she knows how to. 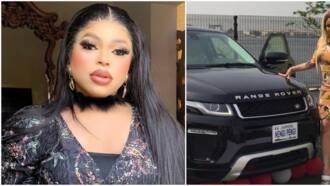 In other news, Legit.ng earlier reported that BBNaija Tacha gushed over Bobrisky.

The Pepper Dem star stated that the controversial socialite is one of the nicest women that she knows.

Noting that people may not like the influencer, she stated that when they are praying for friends, they need to ask God for someone like Bobrisky.