– Lai Mohammed, the minister of information and culture made this known while addressing reporters

Amid the rise in insecurity across Nigeria, the federal government on Monday, January 4, promised the people that in 2021, the country will witness improved security.

The assurance was given by the minister of information and culture, Lai Mohammed, at a new year media briefing with journalists in Lagos state.

According to Premium Times, the minister said President Muhammadu Buhari has continued to provide the armed forces and other security agencies with what is required to function better. The federal government has promised that Nigeria’s security will improve in 2021.
Photo credit: @FMICNigeria
Source: Facebook

He went on to note that a number of platforms there were expected to boost the fight against terrorists and bandits were due to arrive.

While stating that 2020 was one of the most challenging years for the country, Mohammed revealed that the Buhari-led government tackled the issues with courage and determination.

The information minister also blasted the opposition for their constant criticism of the government’s activities as well as that of President Buhari without justifiable reasons.

Meanwhile, Mathew Kukah has come under attack following his criticism of President Muhammadu, with the Bishop of Sokoto Catholic Diocese warned to desist from action that can “trigger unintended consequences.”

Giving this warning is the minister of information and culture in a reaction to Kukah’s remark on Buhari’s government alleging that the president is running the affairs of the country with barefaced nepotism. 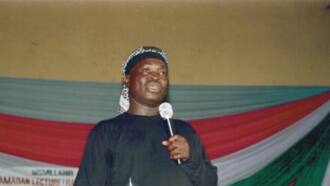 In a statement titled “FG Urges Religious Leaders To Eschew Message of Disharmony”, the senior minister stated that it is unbefitting of religious leaders to fan the embers of disunity and hatred.