Nollywood actress, Anita Joseph, obviously does not care about what people think about her and the queenly treatment she gets from her husband

The movie star who addressed people who criticised the way her husband treats her shared a video on her Instagram page where she was at a shoot location with her husband.

He lovingly adjusted her flowing gold gown as they got ready to pose for photos. The couple looked stunning in their beautiful outfit and carried on regardless of the people present at the location. 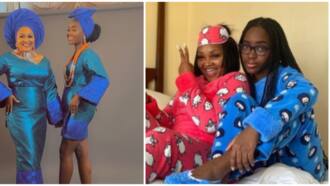 She taught me the meaning of sacrifice, Mercy Aigbe’s daughter celebrates her birthday

In the caption which accompanied the post, Anita mentioned that her husband dresses her up too, and she was gearing up for her birthday.

The actress also noted that she had restricted rude people and it made her glad those people would not know their comments did not get to her.

“My Gee Dresses me up too. Tomorrow is my Birthday chai, I feel so Anew. My waist cincher is from @hourglassfashionworld. Swipe and be blessed. One thing I love abt Restricting people, you won’t even know you’re Restricted. You just Dey insult your mama Dey go. Nxt one is blocking.”

Recall that Legit.ng earlier reported that Anita Joseph slammed a follower called Osagie who said she does not give her husband space.

The beautiful and well-endowed actress shared a video of herself and her husband on her official Instagram page. 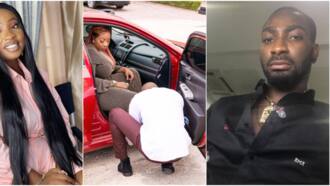 In the video, Anita’s husband was heard jokingly telling people who were fond of looking at his wife’s endowment that they could not touch it.

Osagie told Anita to let her husband have some breathing space. According to him, the actress was choking him.