– Controversial BBNaija 2019 star, Tacha, seems to be moving into year 2021 with positive vibes only

– According to her, life is simple and people deliberately make it tough

Big Brother Nigeria 2019 star, Natacha ‘Tacha’ Akide, has taken to her social media page to preach love to the surprise of many internet users.

The year 2021 is already showing signs of being a good one for many people as a number of celebs have shown that they are about only positive vibes.

The reality show star who gained quite a controversial reputation while on the BBNaija show has talked about people who bag enemies everywhere. 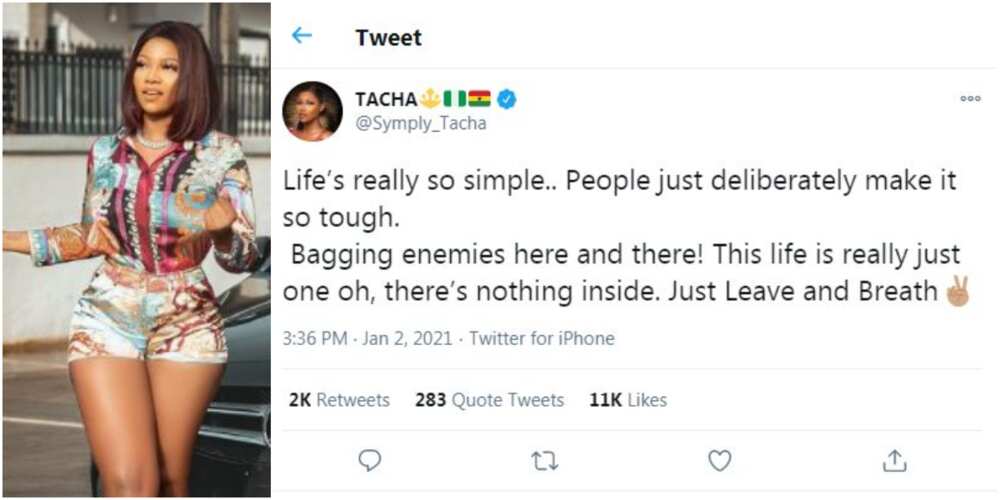 BBNaija’s Tacha is all about positive vibes only in year 2021.
Photos: @symply_tacha
Source: Twitter 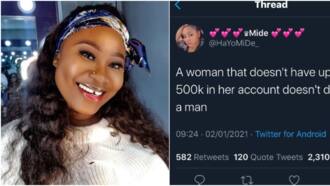 According to her, life is really simple and some people make it very tough on purpose by having numerous enemies.

Explaining further, Tacha added that this life was only one and that people should just live and breathe.

Bagging enemies here and there! This life is really just one oh, there’s nothing inside. Just Live and Breath✌”

In no time, fans took to her comment section to share their thoughts about her post. Some people said that Tacha should actually take her advice because she had many enemies while others agreed with her.

Shewa said that Tacha needed to take her own advice because she fights with everyone:

Eve agreed with Shewa and said that Tacha was negative vibes in the house:

Medusa recounted when she used to really dislike Tacha but is now impressed with her growth: 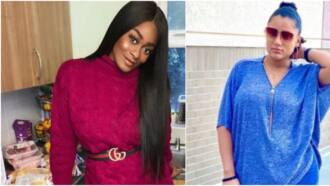 In other news, Legit.ng reported that BBNaija 2017 stars, Uriel and Gifty, have finally reconciled after close to two years of not talking to each other.

According to Uriel, she made the first move by sending Gifty a DM and she was glad that she did because she felt relieved.

Uriel went ahead to call Gifty a special one and recounted how very close they used to be. She also told fans not to bother asking why they fell out because she was determined to have only positive vibes in 2021.