– BBNaija ex-housemate, Ifu Ennada, has always spent Valentine’s day one way, she has decided to disrupt the pattern this year

– Ifu also said that if people did not have what they wanted, they should create it

While people are still looking for the salary they would spend till the end of the month, some people are already in the mood to be spoiled in February. BBNaija’s Ifu Ennada says she will create what she does not have for Valentine’s day
Photo credit: @ifuennada
Source: Instagram

According to the post she shared on her Instagram story, Ifu mentioned that she has always spent Valentine’s day working and on her own.

The reality star continued by saying that this year had to be different because she would hire a man if she had to, send him gifts for her, and have him act like a secret admirer.

The entrepreneur also said that she did not want to believe that she was cursed, and would create something she did not have if she wanted it. 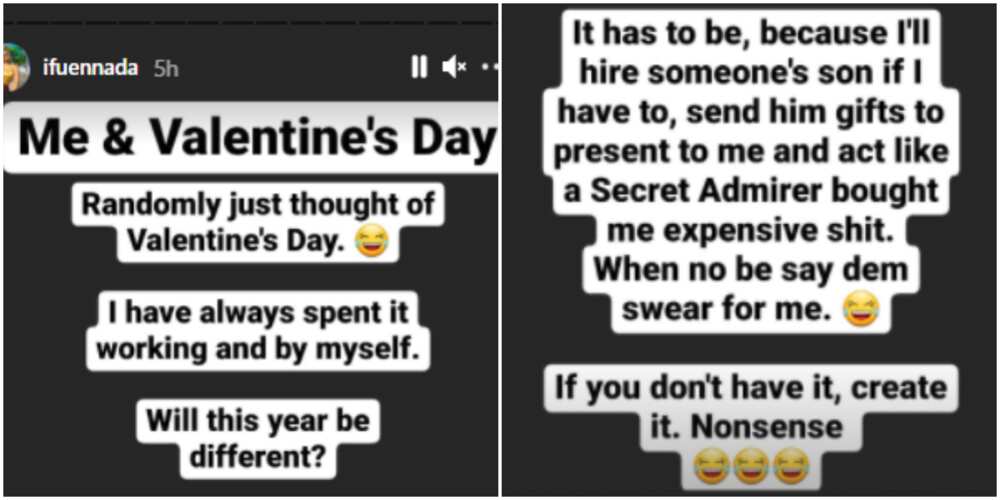 Nigerians expressed their views over the reality star’s statement.

“Dear God, please bless Ifu with a man so we can hear word.”

“Someone should marry this lady please.”

“I’m sorry to say but this girl is desperate for love.”

“Ifu, this your hustle for husband this year must pay, in Jesus name, Amen.”

In other news about the entrepreneur, Legit.ng reported that Ifu Ennada opened up about her behaviour towards men and how a heartbreak from the past caused her to treat men poorly.

The reality star revealed that she got her heart broken by her first love two years ago. Apparently, he got married the same weekend they were supposed to meet up for some fun time.