– Nigeria’s number one army chief, Tukur Buratai, said the year will end in shame for the insurgents

The Chief of Army Staff, Lt.-Gen. Tukur Buratai, says the Nigerian army will shame and disgrace the Boko Haram and the Islamic States for West African Province (ISWAP) terrorists in 2021.

Buratai gave the assurance at an event held at his hometown in Biu local government area of Borno state, Daily Sun reports.

He said the troops of the Nigerian army had done a lot in the fight against insurgency in the northeast in 2020, adding that they were committed to decisively deal with all forms of insecurity in the country. 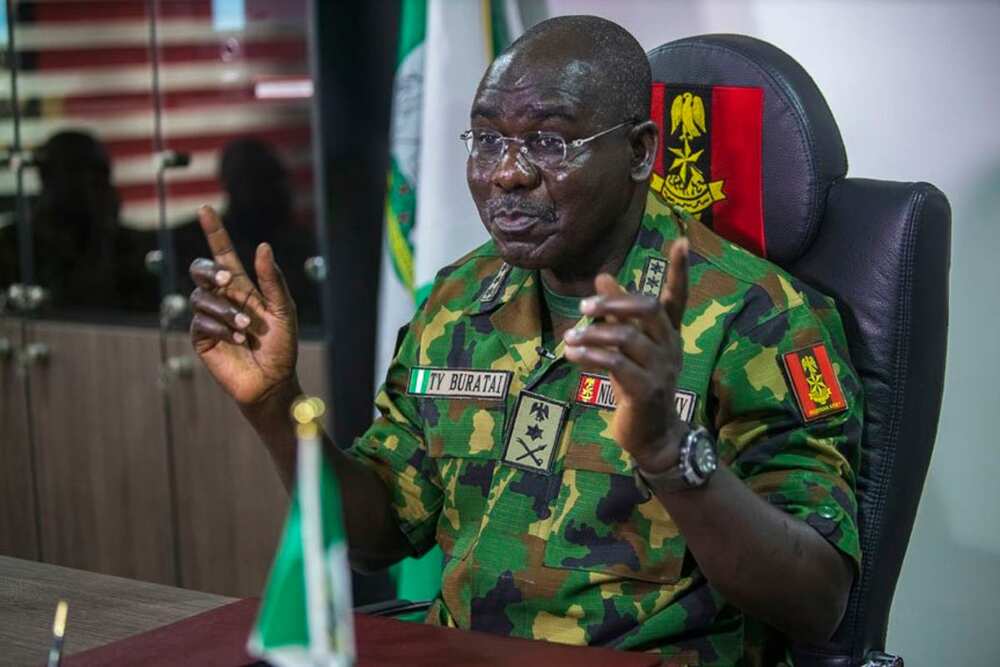 Lt Gen Buratai is confident that the terrorists will meet their waterloo in 2021.
Photo credit: @HQNigerianArmy
Source: Twitter

“I am very optimistic that 2021 will be different, totally different with a remarkable difference from 2020.

“I want you to see it as a challenge and a task that must be done because we are the ones that can do it because Nigerians believe in us and believe that we can do it.

“You should go into the year with full conviction that we can do better to address the insecurity in our country.”

Some Nigerians have been commenting on the comments of Buratai via social media.

“Empty threats!! Invade their hideouts, instead of waiting for them to attack why you repel!! Aren’t you seeing your operational tactics are not working?”

“We are very tired of the rhetoric, just do it.”

“Amen… May God be with every Military man out there. May God bless their families in Jesus name.”

The president made the promise in his 2021 new year message to Nigerians on Friday, January 1, adding that the security agencies will be trained adequately on how to engage, push back and dismantle the operations of both internal and external extremist and criminal groups.

In a related development, the national chairman of the Arewa Consultative Forum (ACF), Audu Ogbeh, has revealed what happens after captives are rescued from the clutch of terrorists following payment of ransoms.

Ogbeh, who was a minister of agriculture under President Buhari’s first tenure said that with information available to the ACF, terrorists divert the ransom money into the purchase of arms.