Nigerian star in tears during one minute silence in honour of her late step-mum, goes on 2 score brace for Barca in the match

A king can be recognised by many things; wealth, fame, and power are just some of the things that set a royal person apart from an ordinary man.

The Elegushi of Ikateland, Oba Saheed Ademola, embodies all of these things and they can be easily spotted from his official Instagram page.

Oba Saheed is a king with class, finesse, and panache. There is no denying that he is one of the most stylish kings in the Yoruba kingdom.

Legit.ng highlights six things to know about the royal majesty of Ikateland.

Without showing off, one would know that the Ikate king loves to look good. Whether he is on official assignment as a king or he is just having fun with friends and family, Oba Saheed ensures he represents the beauty of the crown that he wears. 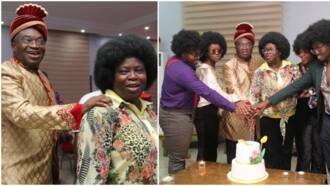 As expected, a king like Oba Saheed can’t be caught with average cars. In the photo below, the Ikate king is seen posing with a luxury vintage car that has his personalised plate number.

3. His love for beautiful women

His first wife Olori Sekinat is a woman that oozes class just like her husband. While the queen is not an ardent user of social media, photos of her online have got people gushing over her beauty.

Olori Sekinat has been with the Ikate king for the past 17 years as they recently celebrated their wedding anniversary. The Elegushi of Ikateland and his luxurious lifestyle.
Photos: @hrmsaelegushi
Source: Instagram

Oba Saheed’s second wife Olori Hadiza is just as stunning as the first wife and she totally befits the king.

Olori Hadiza recently marked her first anniversary of being married to the Elegushi of Ikateland.

4. A lover of the golf sport

The Ikate king seems to enjoy playing golf as a number of photos show him in a golf car, with a club and hand gloves.

As expected, a king is seen around people like him and Oba Saheed is not in any way different.

The Ikate king has been spotted with Dangote, Governor Sanwo-Olu, Ooni of Ife, Prince Charles of Wales, and many others.

Meanwhile, the king’s best friend is the Oluwo of Iwo. Both kings have been spotted at various gatherings and Oba Saheed has a special name for his friend.

Oba Saheed has been spotted catching fun on different occasions. The Elegushi is also known to host celebrities at his palace and he has been seen with a number of Nigerian entertainers. 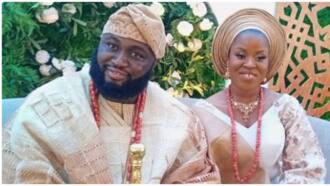 In other news, Legit.ng earlier reported that Ooni of Ife welcomed his newborn son with Olori Naomi into the palace.

video shared to Instagram by @yeramoses, captured the moment Olori Moronke Naomi Silekunola was ushered into the palace with their bundle of joy dressed in an all-white attire with coral beads.

The king was seen placing his hands on the sleeping prince as people around them dance and sing.