– The Nasarawa state governor said he was in the US for his annual vacation, adding that he also used the opportunity to visit his children

– Sule, however, admitted that he did a routine medical checkup just as he clarified that the health checkup is something he has been doing well before becoming governor

The governor of Nasarawa state, Abdullahi Sule, has denied claims that he travelled to the United States due to the status of his health.

The Punch reports that the governor while appearing as a guest on Channels Television explained that he travelled to the US for his annual vacation while he used the opportunity to check on his children. 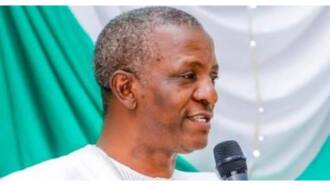 BREAKING: APC chairman in this state tests positive for COVID-19

Legit.ng gathers that Governor Sule’s statement follows the accusation in some quarters that he abandoned hospitals in his state for medical tourism in the US. Nasarawa governor says his US trip has nothing to with his health.
Photo credit: Nasarawa State Government
Source: Facebook

The Nasarawa state governor said he normally goes on annual leave in December, stressing that he took the advantage to spend time with his family in Houston, Texas.

The governor, however, admitted that while on vacation in the US, he equally used the advantage to carry out routine medical checkups.

“My trip here has nothing to do with my health. I’m here on my annual vacation. Usually, I carry out my medical checkups even while I was the MD of the Dangote Group.

“There is nothing wrong with my health. I have just finished my routine medical checkups, dental check, eye check and everything went perfectly.”

Yahaya Bello sends serious message to Buhari, asks him not to do something

Legit.ng had earlier reported that Governor Sule travelled to the US for medical checkup, as indicated in a letter he wrote to the state House of Assembly which was read by the speaker during the plenary on December 14.

In line with Governor Sule’s letter, the state’s deputy governor is in charge of the affairs of the state while he is in the US.

While Governor Sule made efforts to come clean regarding the purpose of his US trip, it appears his statement which indicates his children are living in the US has angered some Nigerians.

“And he is shamelessly coming here to tell us his kids are in US, so Lafia is not good enough for your family but it’s good for the average Nasarawa man! The thing is these same people will still defend him in this comment section. It’s so sad but the truth is the average northern man never experiences civilisation and these leaders have made it so! That has made their opinion cheap to buy.”

“Everyone wants the best for self and family. Unfortunately, governor here has no faith in the state he governs…As long as money is celebrated and worshipped in Nigeria, we will get more of this. Our institutions, musicians and culture all idolize money in the messages they carry(a cancer thats eaten deep into our society). Excellence is almost gone and greed/corruption has taken over….. Are prayers still working for Nigeria????”

“Better to pretend to be sick self, than. saying you went to visit your children. Very annoying response.” 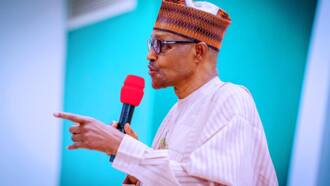 2023: President Buhari finally reveals when he will hand over power

“You can’t even feel ashamed for telling people your children is staying in USA. Why they can’t stay in lafia, Nigerian leaders na wa for you.”

“Public officers and families need to be blocked from foreign countries. This is the only way to make them improve their own country”

In other news, the Nigerian Senate recently queried the Aso Villa over medical bills abroad.

The lawmakers asked the officials at the Aso Villa to ensure President Muhammadu Buhari uses official clinic instead of travelling abroad for medical treatment.

However, doctors under the aegis of the Nigerian Medical Association (NMA) faulted the move by the Senate to restrain the president from foreign medical trips.