– The bishop of Sokoto Catholic Diocese, Mathew Kukah made national headlines after he accused President Muhammadu Buhari of nepotism

– Dino Melaye, a former senator, has reacted to calls by a group for the arrest of the cleric

The bishop has been under fire by some groups in the country for accusing President Buhari of crass nepotism. 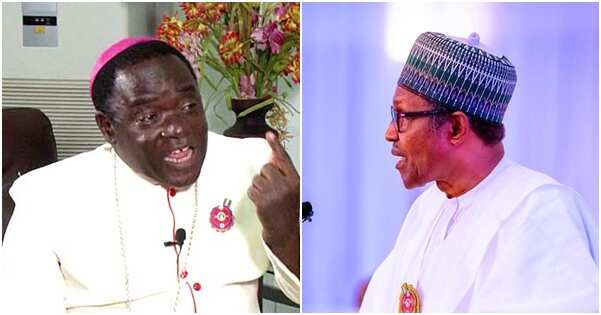 The Tiv Youth Council Worldwide had accused the cleric of calling for an overthrow of the president and called on the police and all security agencies to investigate the cleric.

However, Melaye has suggested such an action against the religious leader would be viewed as an act of intimidation.

He warned that if Kukah is arrested, the president will be shown that the government is not owned by him but by the people.

Onochie, in response, insinuated that Kukah’s outburst may have come as a result of Buhari refusing to part with money.

In a post on her Twitter page on Monday, December 28, she said both the president and the cleric have met a number of times and she shared photos to back her claim.

Akintola described the statement by Kukah as reckless, inflammatory and unguarded.

But the catholic church has defended the bishop against those who are criticising him.

The national directorate of social communications of the Catholic Secretariat of Nigeria in Abuja said that the attacks that the message has attracted are the stock in trade of evil people.