Gareth Bale has been ruled out for the remainder of the year after suffering a fresh injury crisis.

Since his return to the Premier League club in the summer, the winger has found the back of the net just three times in 11 appearances across competitions.

Jose Mourinho, however, confirmed the player sustained a calf injury and will not be available for a few weeks as reported by Goal. And this was why Bale missed Spurs 1-1 draw against Wolverhampton Wanderers a day after Boxing Day.

The Real Madrid star on loan at the North London club will also miss his side’s last game of the year against Fulham on home soil. Mourinho answering reporters says:

“No, I don’t expect Gareth to be fit. I wouldn’t say it’s a serious injury, but I would say a few weeks.”

The Special One also casts doubts on the availability of Lucas Moura and Carlos Vinicius for their midweek game but admitted that Tanguy Ndombele looks set to retain a spot in the line-up.

“We are happy, apart from a couple of matches where his performances were not good, overall there was a big evolution.

“I believe, to play at this intensity – Premier League intensity – and to last for 90 minutes is, of course, another step in the direction of his fitness, but he’s a player of course who is playing very well and is giving some good things to the team.” 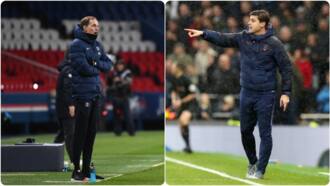 Legit.ng earlier reported that Tottenham manager, Jose Mourinho has hailed his players for their resilience in their 3-1 win over Stoke City in the Carabao Cup quarter-final.

Spurs approached the fixture with the hope of getting a win following their disappointing result against Liverpool and Leicester City in the Premier League.

They, however, did themselves lots of good by recording a perfect win to secure their place in the last four of the EFL Cup.