The year 2020 is finally in its last days and a music producer, Prince David, has taken to social media to warn Nigerians to desist from some prayer points to celebrate God’s faithfulness.

According to David, it is almost that time of the year when people would start to say that God is faithful for sparing their own life even though others died.

He explained further by reminding them that so many people lost their loved ones this year and that it doesn’t meant God was not faithful to them too.

David continued by telling them to stop judging God’s faithfulness based on his ability to do things for them that he did not do for others. He said it was man’s way of thinking and not God’s.

The music producer concluded his post by saying that God is faithful regardless and that people should stop practicing comparative religion.

See a screenshots of his posts below: 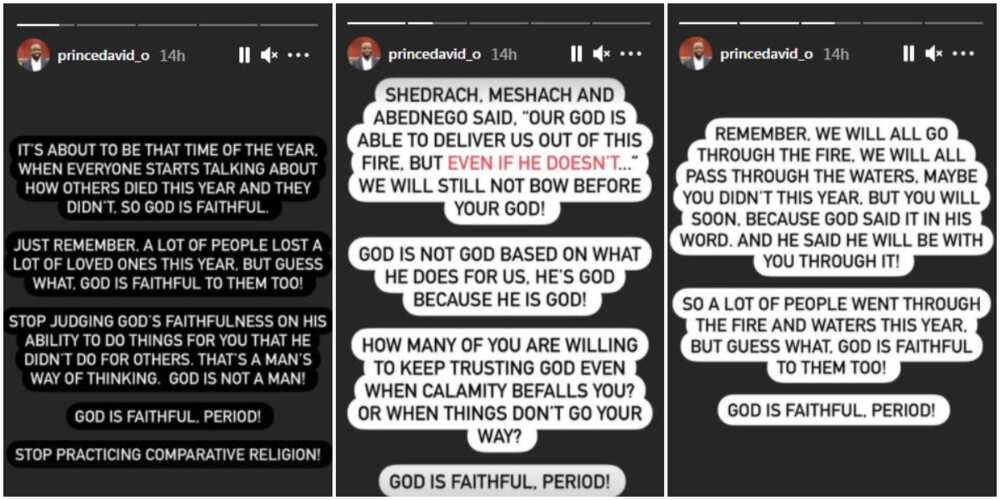 Prince David shared his thoughts on the kinds of prayers Nigerians made at the end of the year.
Photos: @princedavid_o
Source: Instagram

In other news, Legit.ng reported that Nigerian comedian, Sir Balo, took to social media to thank God for his life after surviving a ghastly car crash just a day after Christmas.

The man who has become known on social media for making funny skits reportedly rammed his SUV into a truck. The unfortunate incident was said to have happened on December 26.

Thankfully, the funny man survived the crash and he took to social media to update fans on his safety and to also thank God.