Twitter user, Adejumo Abiola, has left internet users amused and concerned after she took to Twitter to announce the news of her engagement. 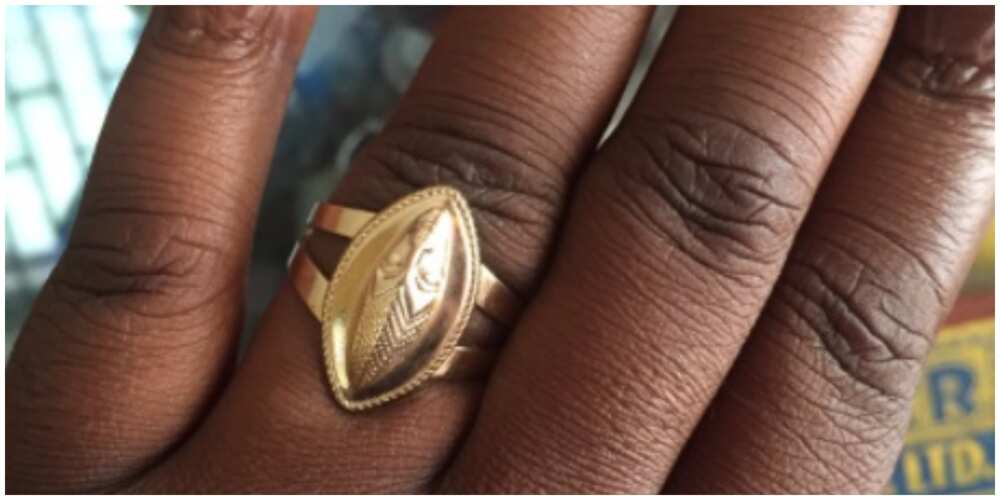 However, what started out with congratulatory messages soon turned into questions and comments all concerned about the nature of her engagement ring.

While most people prefer to go for diamond rings or their imitation, it appears Abiola’s beau wanted something very different and thus, decided to go with the tribal-looking ring.

Several Twitter users have expressed curiosity over the choice of ring and to whom she may have gotten engaged.

See some reactions below:

Some were curious about how she was proposed to.

Twitter user, Alice J, tagged Abiola’s beau a wicked person for engaging her with that type of ring.

There were others, however, who thought the choice of ring was perfect. According to one Twitter user, Bright Alozie, this ring will be a prized piece and will cost a fortune in a decade or more.

In other news, a Nigerian man with the handle @OlisaOsega has stirred conversations online after he advised men to only stick to rings they can afford when they want to propose to their women.

He said worrying over the inability to buy an ‘expensive’ one should not be an issue as the same ring could be replaced by a better one when money comes.

@OlisaOsega said their ladies should not have any problem with the arrangement. Many in his comment section are wondering why an engagement ring should be a cause for worry in the first place.

For how long should a man engage a lady before marrying her? | Legit TV