For many people, driving a taxi isn’t exactly a desirable job to aspire for. However, it appears this same job has got Alams Kabuk reconsidering his career as a Nigerian lawyer.

Kabuk in a recent tweet shared a photo of the money earned from doing a day’s work of a taxi business. Kabuk shared a photo of the money made from one day’s work of taxi business.
Photo credit: @AlamsKabuk
Source: Twitter

Explaining further, he revealed he had gone out with a N10,000 target in mind. He, however, made roughly about N9,000 out of which he took out N1,000 to buy refreshment. Nigerian lawyer makes N10k in a day as taxi driver, says he’ll quit law as he showcases the money he made driving (photo)

Kabuk jokingly added that he just might quit his profession as a lawyer.

“So, I went out to find urgent 2k doing taxi again today. My target was 10k and I made it. This is roughly 9k. I used 1k to buy 2 sticks of suya and 1 bullet to use and calm down… Be like say I go soon leave lawyer work o.”

Nomvula said she just started a new job in Kempton Park after being unemployed for a while. She added that she had been hitchhiking to and from work for over a week. 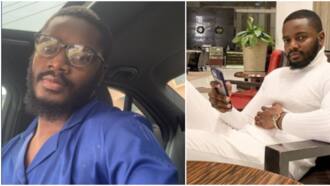 She struggled to find a ride home at her usual spot and decided to go to a nearby taxi rank.

There she sussed out a taxi driver who had the “friendliest demeanour”. She then approached him and explained her situation to him.