– The bishop of Sokoto Catholic Diocese, Matthew Kukah, has continued to make national headlines after he accused President Buhari of nepotism

Reverend Yunusa Sabo Nmadu, a former secretary of the Christian Association of Nigeria (CAN), in Kaduna state has said groups and agencies of government should not consider arresting the Catholic Bishop of Sokoto Diocese, Bishop Matthew Hassan Kukah.

He warned that any plan to arrest the cleric for criticising the Buhari government will be resisted, Daily Trust reported. 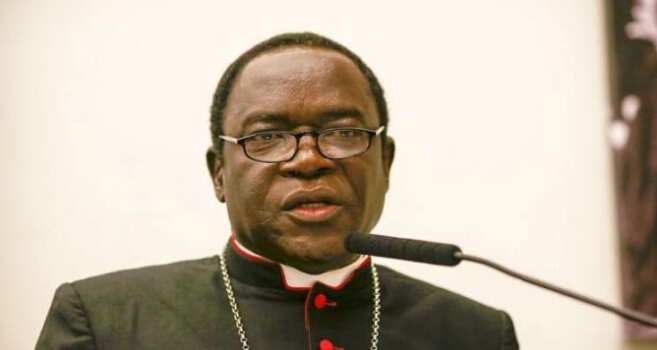 Kukah come under fire for his comments about Buhari
Photo: @thecableng
Source: Twitter

Rev Nmadu stated that the federal government should take steps towards addressing those concerns raised by Kukah, rather than allegedly sponsoring fake groups to attack the clergy.

“There is nothing new about what Bishop Kukah said. The Bishop has spoken our minds, and we will resist any attempt by any group or agency of government to harm him. Enough of this intimidation.”

This is what I will do if kidnapped Catholic bishop is not released, Senate chief whip Kalu threatens

He accused Buhari led administration of attempting to silence critics.

The cleric urged the international community and Nigerians to hold Buhari and his government responsible should anything happen to Bishop Kukah.

Meanwhile, following the controversies generated by his Christmas message, the Bishop of Sokoto Catholic Diocese, Matthew Hassan Kukah, has finally cleared the air.

The Cable reported that he said he did not call for a coup in his criticism of President Muhammadu Buhari as being reported, saying he only expressed his personal view based on evidence.

Speaking with reporters on the night of Monday, December 28, Kukah said it is unfair for anyone to report that he called for a coup.

In another news, Dino Melaye, a former senator, has warned President Buhari against attempting to arrest Bishop Kukah for criticising the current administration.

Melaye suggested that such an action against the religious leader would prompt a backlash from the people.

He warned that if Kukah is arrested, the president will be shown that the government is not owned by him but by the people.