What police should do to Biship Kukah now – Tiv Youths 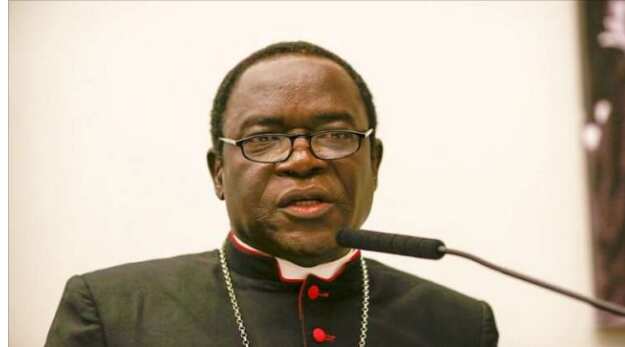 The Tiv Youth Council Worldwide has called on security agencies to invite and question Bishop Hassan Kukah for calling for a Coup in the country in a recent press release.

The group in a statement by its Convener, Honourable Mike Msuaan vehemently condemned Bishop Kukah’s incitement of the South against the north and his open call for insurrection and lawlessness in the country. The president of the Tiv Youth Council Worldwide stated that such a call is treasonable and must be thoroughly investigated.

According to Honourable Mike Msuaan “the present administration met a very terrible security situation in the country which included the bombing of churches and mosques, schools and other public infrastructure. The security has improved to a level that bombings have stopped and the insurgents have been thrashed to cowardly attacks on soft spots.”

The group wondered why the Bishop has not found it Honourable enough to commend the efforts of the president in the rescue of some of the Chibok girls and all the Kankara boys recently rescued from the hands of the insurgents.

Speaking further, the group asked security agencies to place Bishop Kukah on security watch list and investigate his activities. The group warned Kukah to desist from playing politics on the pulpit.

The group accused Kukah of working for the interest of enemies of the country and sowing seeds of division at a time well-meaning Nigerians across regional, ethnic and religious divides are working and praying for peace in the country.